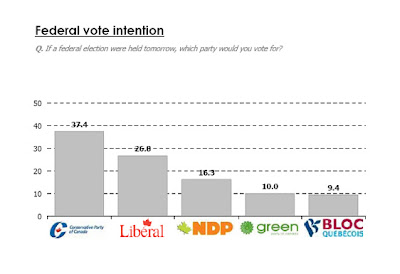 ...a little further from majority territory, about where we were at election time last year, and down a little over 3 points from their EKOs peak of three weeks ago.

No regionals that I could find, and of course taken before the gun registry vote last night. Difficult to say how this will effect things going forward. A few have argued that, the issue off the table, Libs./NDP might have an easier time in rural ridings. We shall see. I think the vote will allow those hard-core Tories who have been angered by perceived over-spending and other sins of the gov. to forgive them; I can also see the Libs losing support for betraying their urban base. I can certainly see it affecting their fundraising numbers; not like they'll get another penny out of me, for example, although I am looking forward to Mr. Rocco's next email. He will get a long, obscenity filled response, if nothing else.

Posted by bigcitylib at 6:17 AM

Is your headline accurate with MOE?

If polls move up down 1% a balanced or fair assessment is no change if you include MOE.

They should also not use decimal places.

But if positive spin is helpful about the 1% change, okey dokey.

Well, more important is its down 3%in 3 weeks. EKOS says:

"The results carry a margin of error of plus or minus 1.7 percentage points, 19 times out of 20."

...so I think thats significant over the time frame.

But if positive spin is helpful about the 1% change, okey dokey.

Well, since you were wrong, apologise for your slur, you coarse and primitive fraud.

Undecided is 16%. I had to go the Ekos site, download the full report and check the tiny footnote at the bottom of page 3 to find that out. It's not reported anywhere else.

"I think the vote will allow those hard-core Tories who have been angered by perceived over-spending and other sins of the gov. to forgive them"

I use my own family to measure this, and I agree with you.

"I can also see the Libs losing support for betraying their urban base."

I am not sure where that support will go however, since the NDP also betrayed their urban voters. I agree it will show up in fundraising.

Gayle, yeah well that is the thing. If both your party and the other one suck, why change? Which is I suppose the thinking within Lib and NDP circles.

I suppose the Greens are still out there.

Consistency is VERY important. Try it will help with your lack of credibility.

Only polls that show a decline in CPC matter?

One Poll is means something?

Cherrypick data in one Poll is appropriate but using same logic against Liberals is "con" pollsters ?

Try to be consistent on use of Pollsters.

Can someone teach CS the English language?

The only point I'm making, turd, is that all the data should be presented. 16% is not trivial. In the past, the undecided vote was always reported along with voter preference.

TG use of Pollsters, are you being consistent or cherry picking a positive comment?

TG are you leading the brigade of cherry pickers?

You could always stay home.I think I will.

Well, you can stay home in Alberta Gayle, because voting wouldn't make a difference anyway.

Some of us don't have that luxury.

I can here it now.

"If you elect a liberal they will bring back the long gun registry."

Expect it. It is coming.

If the reform/cons get a majority, Canada will become another police state

based on voting record of the Liberals they have had a majority for years.