Iggy: To Know Him Is To Dislike Him Marginally Less 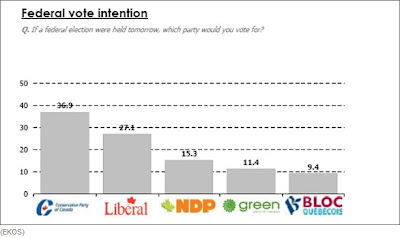 ...back to election levels.

All just twitches, really, but compared to early Nov. the Libs have twitched up, the other parties down.

Looks like my prediction that the Lib reversal re the gun registry would hurt them hasn't come to pass. Perhaps the idea is to cleanse the party of anything resembling an idea and wait until people simply get tired of Harper and Co. After all, the Conservatives and NDP have done it (NDP by betraying its green wing and over the registry). Why should the pragmatic party, the party that has always already pre-sold out, be the last one required to bear a consistent ideology? Color me confused.

Oops! This looks dangerous! Everyone going there, just get bombed and fornicate and, if you're asked about ideas, say the Libs. will introduce universal daycare...again...eventually.

Whoopsie! I was comparing to a three week old poll. There are several others that have come out between then and now. Still, numbers haven't changed much.

New tag: "The Party without a Purpose"

"Party without a Purpose."

You mean they're not the lying, cheating, criminally-authoritarian torture-approving hate-mongers who can't manage the country's finances and who attract nothing but sycophants, blowhards, rednecks and cretins?