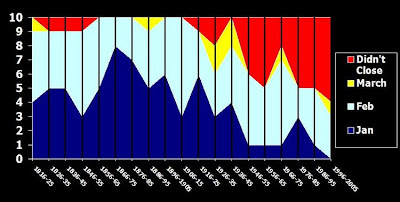 Physical changes mostly involve the temperature of the lake. Higher winter temperatures lead to a reduction in winter ice cover. You may have noticed that such reductions have already begun. Prior to the 1950s it was highly unusual for Lake Champlain not to freeze in a given year, but recently an absence of ice cover has become a fairly regular event. Higher temperatures mean the lake will stratify earlier in the spring — setting up a warm layer of water over a colder deeper layer — and will stay stratified longer. A 1979 study stated stratification in the Main Lake typically began in early June; more recently, however, stratification has begun in early- to mid-May.

Simon Donner tells a similar story about the ice around Baffin Island. He also talks about the suggestive (but not yet proven) connections between a warmer than usual arctic and a snowier than usual main-land NA:
The low ice thickness across the Arctic is part of a long-term trend. The current low in the SE Arctic has also been driven by the prevailing weather conditions over the past couple months. As was reported in the CBC News yesterday, a lingering high pressure system has held temperatures well above normal and limited ice formation. That is the same weather pattern that directed the cold Arctic air masses to east coast of North America and to western Europe and caused the huge early winter snowfalls. So when you hear scientists say that record snowfalls could be related in part to climate warming and the melting Arctic, this is what they mean.

A bout of cold and snowy weather, by the way, that appears to be over.

Posted by bigcitylib at 7:01 AM

Arctic jet streams have been reported for several years now as being far, far south instead. Exposed Arctic ocean is believed to be moderating the climate up there.

Then with air over the Gulf hotter than usual, and thus more water-laden, increased precipitation from northern-heading air mass is inevitable. When those air masses hit cold air, snow is the result.