As the folks from SunTV move into their Ottawa facility, we can glean a few clues as to the nature of their operation from the pics posted by star reporter Brian Lilley of his own new digs (yeah, Lilley's the chair-gate guy): 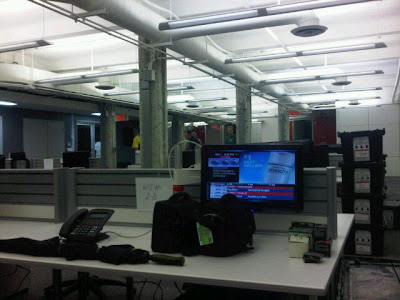 1) They're not even giving their top gun a cubical. But on the bright side, he's getting the end work-station (WS#28). It's like having the end unit in a row-house: it's worth a little more because there's only people on one side. Hopefully, for Brian, the men's isn't just offstage right. And I'm all for reporters not getting too shirty about their personal space. This kind of arrangement prepares them for the McDonald's cash-out line that's in their future.

2) I'm not sure, but that monitor looks like an Acer to me. Not that I mind. I have an Acer. I bought it at Walmart, and I got a free bowl of soup out of the deal. The guy at the store said "It'll work great for three months, then cover your eyes whenever you try to boot up." Which I do, and so far everything is OK.

Remember, it took Fox News North months to get their other star, David Akin, a blackberry. And apparently he doesn't even rate an end-workstation.

PS. McClelland asks in the comments when FNN is due to go on the air. The date right now appears to be mid-March. Some dude on the BT forums said Ezra told him this, but I can't find the thread right now so you will have to trust me or go look yourself.

Posted by bigcitylib at 7:07 PM

Do you know when SCTV...er, SunTV goes on the air?

Mid March. See update to original post. Actually, thanks for bringing that up.

OMG . . . Just when we were starting to believe The Star and the Globe and Mail and CBC, we are getting opposing views. This country is going to hell in a handbasket.

"Hell in a hand-basket" kind of sounds like Brian Lilley's new work environment. A 99 cent hand-basket too. Thanks for bringing that up, PK.

I can hardly wait until "Fox News North" starts airing so when you lefties start blogging about how biased they are, we righties can bring up all the old Liberal mantras about how neutral they are . . . just like The Star, The Globe and Mail and CBC.

I can just see the irritation at the CBC and the Toronto Star...let them be annoyed.

Thanks for that, Dumb and even Dumber.

Fox News North has already declared it will not be neutral. Why do you think Kory has been trying to sell this whole "media bias" crap? If people are stupid enough to believe the media are generally biased for the liberals it makes it easier to sell their own bias for the CPC.

No, we will be busy documenting and exploding every lie that FNN tells, and reminding you of each previous lie every time it comes up with a new one. You won't enjoy it.

Rotterdam said...
This comment has been removed by the author.
3:37 PM