This sad story reminds me of this one: 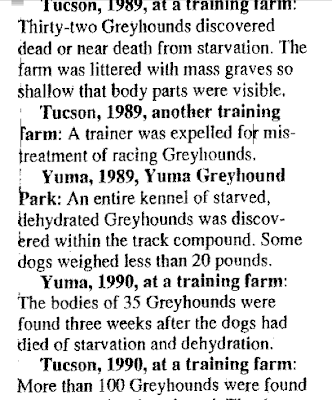 My mom and dad had just started going to Yuma about this time. When I would go down to visit, the Sunday flea-market at the dog-racing track was always on our list of things to do. You could wander around with an open can of beer ($1.25), eat Mexican flat-bread covered in sugar, and buy L.A. Gear runners (factory seconds) for $20. Believe me, its about the most exciting thing that happens in Yuma.

This was the racing off-season, so I imagine the dogs were suffering and dying just out of sight. And its funny, when the story finally broke, the townsfolk were shocked...shocked!... that such a thing could have happened. Nobody had ever wondered, apparently, where all these animals went after their four-year or thereabouts racing career came to an end.

The problem with Greyhounds is the same as with Huskies, I suppose: they're huge animals that eat a lot and need lots of room to run around in; taking them for a morning walk (through a desert, no less) would be quite a chore. In any event, as a result the town put in place an "adopt a Greyhound" program, and these days you don't hear the same kind of story.

It always seems worse when bad things happen to dogs. They are innocent, whereas people are assholes.

Posted by bigcitylib at 7:00 AM

Email ThisBlogThis!Share to TwitterShare to FacebookShare to Pinterest
Labels: Greyhounds

Anything for a buck.Screw the consequences.

I dunno, my mother's Llassapoo (or whatever the fuck he is) is an asshole. Big time.

My first instinct is that the problem is with you rather than the dog.