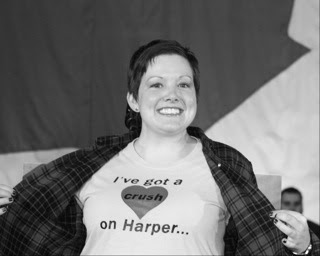 She'll be running the CPoC War Room. Not hot, though warmish; has been caught doing stupid stuff.

Posted by bigcitylib at 8:09 PM

unny, according to Lawrence Martin's "Harperland", Byrne's known for her temper tantrums. A loose cannon. Someone even ol' Tom Flannagan didn't have high regard for.

She outta go well with her new boss, Guy Giorno, the come back kid.

Yep. Liberals are soooooo much better at treating women like equals instead of sex objects.

Harper's paranoia leaves him little alternative but to appoint these uber-partisan nitwits. If what LM writes in his book about Byrne is accurate, I think the new war room bossette (hello, PK) is an awesome choice! More, please.

fmpsportsguy said...
This comment has been removed by the author.
6:55 PM

"Not hot, though warmish"

This is how a Liberal describes a woman who just got appointed a job.
Very revealing.

The basic aim here is Harper's hoping Byrne can help him create a meme that breaks through his gender dome... More sweaters, actual touching of real persons, perhaps some karaoke of Air Supply songs? We can't take it for granted that she won't be able to help somewhere in his mission...

Women in Power Are Set Up to Fail

Are women set up to fail — by being appointed to positions of power only in hopeless situations?

- like when a dept. is about to go under financially and the CEO puts a woman in charge knowing she's going to fail and then he runs around saying, SEE, women are useless.

called it “the glass cliff,” which they contend is an invisible form of prejudice

Two British academics say so, and they claim to have proved it this year. In one study, they took 83 businesspeople — roughly half of them women — and described to them two companies, one that was steadily improving in profitability and another that was steadily declining. The subjects were told to pick a new financial director for the firm and were presented with three candidates: a man and a woman who were identical in experience and a lesser-qualified male. The subjects were slightly more likely to pick a man to lead the successful firm but were far more likely to pick the woman to lead the failing one. Two other experiments with similar designs yielded the same result: When presented with men and women to lead a company that’s going down the tubes, people pick the woman.

I can't believe Jenni is supporting my CRUSH group. YAH!

Punch in your postal code and a list of your neighbours will pop up.
http://www.canada411.ca/search/address.html
Call them. Ask them how they feel re politics. Listen to them. If you get a chance, tell them about HarperCon and how we're all headed to hell in a handbasket unless we mobilize.

What if Jenni Byrne buy suit for her husband and she choose emensuits.com