A Vet, A Radiologist, And An Anaesthetist Walk Into A Scientific Controversy...

A new "peer reviewed" paper, purporting to show that living in proximity to wind turbines has a negative effect on sleeping habits, has received some attention both locally and internationally.  Its crap.  An effective rebuttal has already appeared here.  What follows will reference the piece from Quora heavily with a few of my own notes added.

Firstly, all three authors, Jeffery Aramini, Michael Nissenbaum and Christopher Hanning, are long-time anti-wind activists.  Furthermore, the three reviewers mentioned in the paper are all paid anti-wind 'experts' who have a long history of directly testifying against wind energy in various court cases.  One of them, Carl Phillips, lost his position at the University of Alberta several years ago for taking money from the tobacco industry.

I would further note that Aramini's training is as a veterinarian; Michael Nissenbaum is a radiologist; and Christopher Hanning is an Anaesthetist.  So, really none has any experience that would be relevant doing a study like this with the possible exception of Hanning, who claims to have some knowledge of sleep disorders.  Certainly, designing surveys is not one of their areas of expertise.

This is not Nissenbaum's first study of the Mars Hill or the Vinalhaven wind farms.  He ran 'studies' there in 2010 and 2011 as well, using a format pioneered by anti-wind folks in the UK and then by Nina Pierpont, creator of Wind Turbine Syndrome. [3], [9] The a-scientific studies are so poorly constructed that they are guaranteed to make people ascribe new symptoms to wind turbines, and to take completely ignored minor symptoms and turn them into major complaints. These studies have pre-loaded the biases of these study groups, making it difficult to accept the the conclusions of this better structured study.

Indeed, below is the questionnaire Nussbaum used in one of his earlier studies, and perhaps in this newest one as well, because the new work is simply a reiteration of the old.  The survey is available through first link here. 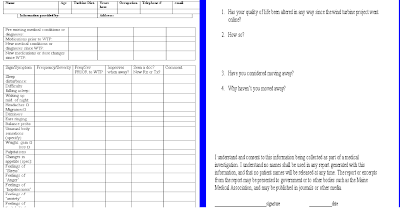 Its easier to read if you click on the image but, speaking generally, it looks like an invitation to bitch, whine, and complain more than an attempt to elicit useful information.  Finally, a recent post to the Climate Sceptic mailing list brings out some of the authors' preconceptions:

I was fortunate to attend a meeting with the two noise acoustic engineers that helped write the paper.  They told me an very interesting story.

They were in a house working on equipment, then on about the third day they began feeling ill.  They had headaches and lose of alertness.  Then on the 4th day they had to travel elsewhere for a week.  They immediately felt better after leaving the house.  When they returned, their symptoms got much worse.  After awhile it dawned on them that a large wind turbine sat not very far from the house.  They theorized that the noise eddies from the turbine was a low frequency noise which humans cannot hear.  The noise eddies enter the house an actually vibrate everything at a low frequency, which they thought caused motion sickness.

They said that turbines near noisy areas such as cities did not cause this problem, likely due to other noises disrupting the noise eddies.  It took one of the engineers about 3 months to return to normal health, and when I talked to them the other engineer was still having symptoms.

Hard to tell who among  the research team is being referred to in this note, as none of the three main authors come anything close to being acoustic engineers.  Nevertheless, these kinds of sentiment suggests that the results of their study are a product of confirmation bias rather than the measuring of an actual phenomenon.

Maybe they should have checked for mould.

Thanks Mike. Just a note; the 2012 study just SEEMS TO BE the 2010 study. That's why I think the questionnaire I give here is the one that was used. I'm not sure how these guys folded in the results of earlier 2009 "pilot study" at Mars Hill; they may have just added in those responses to what they got in the 2010 survey.

The Mars Hill study Nissenbaum did that I first ran across a couple of years ago wouldn't have created data sets useful enough to generate the Noise and Health paper. I think something else went on, or they are inventing stuff.

"The Mars Hill study will soon be completed and is being prepared for publication."

3rd paragraph. I would theorize that it all came out of the one survey initial survey, maybe with more stuff added on.