So the Nissenbaum , Aramini, and Hanning paper, that purported to show a connection between proximity to wind turbines and a decline in sleep quality, has been given a working working over by a number of experts in a short report commissioned by (full disclosure) the Canadian and American Wind Energy Associations.  The result is here; the general conclusion:

Overall, in our opinion the authors extend their conclusions and discussion beyond the statistical findings of their study. We believe that they have not demonstrated a statistical link between wind turbines – distance – sleep quality – sleepiness and health. In fact, their own values suggest that although scores may be statistically different between near and far groups for sleep quality and sleepiness, they are no different than those reported in the general population. The claims of causation by the authors (i.e., wind turbine noise) are not supported by their

This document is referenced heavily in the report.  Its chronicles an appeal by one Katie Brenda Erickson and Chatham-Kent Wind Action Inc.to the Ontario  Ministry of the Environment over a decision to build a series of wind turbines outside of Camden township.  It contains an extensive discussion of a preliminary version of the Nissenbaum paper.  Its particularly interesting in that one of the issues around the paper is whether its authors are  "disinterested scientists" or "anti-wind activists", with detractors and defenders splitting on this issue (for example see Jim Cummings relatively positive assessment of the paper here).   The study involved a survey distributed to Maine residents living around a pair of U.S. wind farms.  In the years leading up to it Nissenbaum visited  a good proportion of the respondents around one of the sites (Mars Hill) and elicited responses using similar but far less rigorously designed surveys.  For this reason, it can be argued that some of the responses he got in his formal study were preconditioned by the earlier visits conducted in a less scientific setting.  So its interesting to find this passage in the Environmental Review Tribunal document:

The Director argues that Drs. Hanning, McMurtry and Nissenbaum conceded that they only became involved and acquired expertise in the issue of noise and wind farms when they thought wind farms would be located near their residences.

"McMurtry", incidentally,  refers to Robert McMurtry, a paediatric surgeon  who is not one of the paper's authors, but who has also been floating around the wind power debate in Ontario for the past few years and has been instrumental in promoting Nissenbaum's research in this province.

In any case, a glance through Nissebaum's original 2009 first study--rendered into a power-point presentation--makes the slant of his sympathies even clearer.  This slide compares the noise generated by wind turbines to the kind of sleep deprivation techniques used to  interrogate prisoners of war: 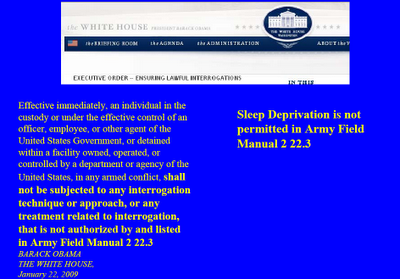 So I would argue that the paper answers a question that had already been decided in the authors minds.

These grumblers have been thoroughly debunked by European studies of communities fiercely opposed to wind power and others that were just fine with wind turbines in their midst.

Obviously the absence of the physical complaints windpower opponents raise in those communities that seemed fine with wind turbines presents an insurmountable hurdle to the wind power witch hunters. Plainly the malaise is psychosomatic,at best,m or simply contrived by those who hate the aesthetics of wind turbines or fear the loss of property value.

They're hucksters, the lot of them.