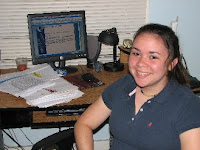 Meet 15 year-old Kristen Byrnes of Portland, Maine, the Denialist Industry's latest sweetheart. Kristen forecast the end of the Australian drought in late May, so she's zero for one in predictions, but this hasn't stopped high level climate change skeptics like Steve McIntyre and Richard Tol, whose hair must be seen to be believed, from praising her website and in particular her attack on "An Inconvenient Truth", at least until the many errors in it have been pointed out. Mr. Tol:

I never said that Kristen Byrnes's piece is "more accurate" than An Inconvenient Truth or the Stern Review. All three contain basic and unnecessary errors, but I did not count them and I did not compare them.

Now, why this post? A couple of reasons. Firstly, the fact that Kristen's is being used by the "bigs" in the climate skeptic business to in effect launder their attacks on figures like Al Gore and James Hansen is an indication of the extent of their desperation. Secondly, there has been some speculation that Kristen was a fictional character along the lines of Andura Smetacek, and I would suggest the p

hoto from the newsbusters site should put that line of inquiry to rest. Thirdly, I have been looking for an excuse to post a picture of Mr. Tol and his freaky hair, and now I have one.

One Of Kristen's
Many Fans!

How would you like to run into that guy in a dark alley on a moonlit night?

i wouldn't...he'd probably try to convince me that there is no scientific consensus that the moon exists.

good post bcl. interesting if that is the case.

Kirsten has it in for James Hansen, what a surprise. And she's on about temperature stations. How original! She couldn't possibly just be repeating other deniers' lies, could she?

But hippies support AGW! So do you need a nice haircut to be a believer? And is Kristen really a geezer in disguise, as you've said all deniers are geezers?

Man, the straws you guys are grasping at to support your cause du jour are getting pretty short . . .

Anonymous said...
This comment has been removed by a blog administrator.
3:59 PM

I hardly ever delete messages but good lord #5 went on and on. Learn to summarize, beloved trollies.

Looks like the extreme humidity created by climate change/global warming is frissing his hair. He needs to buy some good hair products that help tame the hair when the weather is bad.

Yer just pissed cause she's got a better handle on science than you do.

looks more like a "Skippy the Kangaroo" haircut to me.

"she's got a better handle on science than you do."

A handle on science? You obviously did not read any of the stuff in her diatribe. For starters, the graph she concocted to show CO2 increase over the 20th century is complete BS, as Eli Rabett points out.

The only thing she has a handle on is the right-wing-nuts. She seems to have them wrapped around her little finger. They'll undoubtedly put her through college with the donations they make on her website.

For any who doubt my claim about the "Skippy the kangaroo" haircut, here's proof positive

Unfortunately, Google Alerts brought me to this site.

I think that BigCityLib conclusively proves that climate change is dangerous indeed.

You grew it that way AFTER you got tenure, right?

The hairstyle is meaningless, of course and surely he should be able to take the jokes about it. He's a big boy.

But read some of the nonsense that guy has posted over at Deltoid.

I have, and I've read a couple of his papers on Climate Change and Tourism, and his conclusion that Canada and Russia will come out big winners. The analysis makes my head spin.

Unfortunately, the economic aspect re the effects of GW strike me as being the weak link in the whole debate. I don't take any of it, on either side, too seriously.

I was tenured at 25, and I had a lot more hair then than I have now.

So is Al Gore a shrewd businessman or a scam artist? Seeing as how he jets around the world nonstop, has a non-environmentally friendly mansion, also owns a non-environmentally friendly strip mine among other businesses, and is the chairman of one of the largest carbon offset companies in the world who stands to make HUGE profits from CO2/AGW fear mongering, it's hard not to think that he's fueling people's fears in order to line his own pockets. This is at least far more provable than any phantom 'funded by the oil industry' research that you Believers are always complaining about.

The science is settled - Gore is a scam artist of the highest order.

'So is Al Gore a shrewd businessman or a scam artist?"

That's a typical response from those who can't argue with the science.

Attack Al Gore's flight and other energy use habits.

It looks to me like Al is a hypocrite, but what's that got to do with climate science?

Your attack on Gore is a diversion -- and juvenile one at that, just like that paper from Kristen whatserface.

Perhaps you are both the same age. You sure sound like it.

Richard Tol said: "I was tenured at 25, and I had a lot more hair then than I have now."

Lucky for him, he also got tenure before he started posting on blogs.

Like guided boat tours out to Tuvalu to see where it lies under the ocean?

Or boat tours to see the polar bear who has the world record for treading water? (ten years, 364 days and counting)

or maybe a airplane safari above Bangladesh to view the hoards of Wildebeest far below on their mass migration inland to higher ground to escape the rising waters. but wait. There are no wildebeest in Bangladesh. Those wildebeest are people! )

Glad we have people like Tol considering these kinds of things. Keeps them out of engineers' hair, so to speak.

Thanks for interesting article.

You dont like the guy because of his hair? Seems rather... intolerant... for leftys.