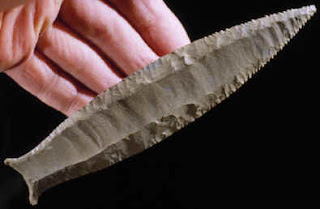 Just a link to ARC's long but well-done discussion of the White Nationalist mangling of the Solutrean Hypothesis, wherein--according to the bone-head version in any case--North America's first settlers were European, who were later slaughtered by Asian hordes who swarmed over the land-bridge from Berengia. As far as I can tell, the archeology stuff is accurate, and its a good excuse to look at some very beautiful stone point technology.
My picture here is of a Cumberland Point, from a bit later in Prehistory (image got from here). They are very rare, and considered the Cadillac of North American lithic technology.

Thanks for the shout out. Seems that Kyle Bristow wasn't as pleased with the article as we were though.

bleeding heart Liberals worship Hitler. they love to say "nazi".gives them reason to live.get a life,your fake outrage does not work.

No one worships Hitler, mauser. You should really get some help. When my uncle was diagnosed with schizophrenia twenty years ago he had nazi obsessions. Seriously, Mauser, if you feel this way about a significant part of society then you need help.

Rene Gayburn, your a schizo like your uncle. obviously it runs in the family. if you disagree with me you are a racist. get off your knees and stop hanging around public toilets.

Yeah, Mauser98. You need some help before you hurt someone. Just because someone disagrees with you does not make them a racist. Heck, mauser98, your views are irrational and thus most of us must be racists in your view.

Get some help mauser98. Think of others' safety around you when you are in this state.