And It Induces Seizures!

We're talking the new "IOC rapes gay Nazis" London 2012 Olympic Logo and some of the video segments produced to promote it. From the Beeb:

A segment of animated footage promoting the 2012 Olympics has been removed from the organisers' website after fears it could trigger epileptic seizures.


Olaf was kind enough to link to a page of alternative logos. I can't say I like any of them,
but this one is probably the second most awful, after the one they
eventually chose: 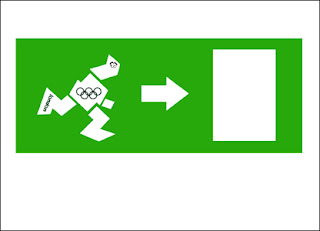 I call it Athlete Running For Toilet.

Posted by bigcitylib at 5:23 AM

I'm still blanching at the cost of the whole thing. 400,000£ for that? I just can't picture how anyone sensible would justify that. Of course, branding experts are falling over themselves doing just that, so I rest my case.

Anyone who uses the term "branding" should be tied down and branded.

The aesthetics of the logo are immaterial; any brand mark can become acceptable if it's shoved in people's faces long enough.

When the revolution comes, let's put the PR people against the wall first.

That £400,000 does seem like an outrageous amount of money… even if the end product had been decent. Although to be fair, it might have been for a whole “branding” package. Still seems awfully high though. No wonder these things always seem to go wildly overbudget.

Hard to believe most of the rejected alternatives were even more terrible, or that arguably the best of that lot might have been the one made to look like common street signage. Pathetic.

I thought you were a graphic designer anyway...you know, what the PR people call "the talent."

This one is animated.