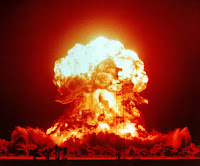 Sometimes Stockwell outdoes himself. From his weekly column:

What do you do when you're sitting around a table with the world's American super-power which has been outside the deal, and the world's German hosts who says "Everybody better deal" and the world's former communist giant who says "I'll aim my nuclear rockets at your cities if you go ahead with your deal”?

The deal, it becomes apparent, is the Kyoto accord. And thank Goodness, says Stockwell, that Canada "stepped up" with a compromise. Otherwise, who knows? We were this far from Armageddon. Paris might have gone up in a ball o' fire.

Stock, (or Stinky as I like to call him) has the mind of a flea..........the scary thing is, in the entire world alliance of the right, think like he does. You will recall that Doris (his real name) led a march around a small town bar in Alberta calling on God to bring it down......tell me how he differs from the guy who spit on the Whitehouse lawn.
Putin must be laughing at how really, truly, patently stupid people get to rise to power in a democracy.

Apparently there was a listening problem at the Canada part of the table.

Russia was rattling about European powers allowing the US to install part of their "missile shield"...

But, then it's not like any of the Cons ever learned to listen to people.

Putin had to threaten nukes to stop Kyoto, because the Liberals had already threatened to take Taliban lovers.

Putin loves Liberals . . he'd never threaten to target his arsenal of thousands of ICBM launched MIRVS at a LIBERAL especially a European liberal

Putin has to try to take over Europe now before the Mooslims do. Who would you rather fight?