The Yes Men Cometh (To The Tar Sands) 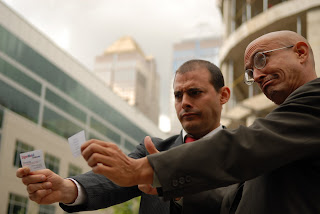 I think it was around the time of the G8 summit that I read a prediction that U.S. environmentalists would be targeting the Alberta Tar Sands as the epicentre of the fight against AGW. Well, they have arrived in the form of these two guys. The Yes Men:

...pretend to be powerful people and spokespersons for prominent organizations, accepting invitations received on their websites to appear at symposiums and TV shows. They use their newfound authority to express the idea that corporations and governmental organizations often act in dehumanizing ways toward the public. Elaborate props are sometimes part of the ruse.

Last week they showed up at Calgary's Go-Expo, Canada's largest oil conference, and gave a speech in which they announced

...that current U.S. and Canadian energy policies (notably the massive, carbon-intensive exploitation of Alberta's oil sands, and the development of liquid coal) are increasing the chances of huge global calamities. But he reassured the audience that in the worst case scenario, the oil industry could "keep fuel flowing" by transforming the billions of people who die into oil.

"Vivoleum works in perfect synergy with the continued expansion of fossil fuel production.... With more fossil fuels comes a greater chance of disaster, but that means more feedstock for Vivoleum. Fuel will continue to flow for those of us left."

The oilmen listened to the lecture with attention, and then lit "commemorative candles" supposedly made of Vivoleum obtained from the flesh of an "Exxon janitor" who died as a result of cleaning up a toxic spill. The audience only reacted when the janitor, in a video tribute, announced that he wished to be transformed into candles after his death, and all became crystal-clear.

And here's that tribute to Reggie:

Unfortunately, when "mere" Canadians speak out against the ongoing disaster that is the Tar Sands as it is currently being developed, the folks out in Calgary just don't listen. Given the culture of Alberta, and our current federal government, it seems that a more effective tactic is for American Greens to pressure their own elected representatives to, for example, consider how much carbon is produced in the creation of their gasoline, as California is now doing. It kind of sucks that Canada should have to rely on foreigners to force us to clean up our act environmentally, but when you're faced with a bunch of recalcitrant cowboys, what else can you do?

OTTAWA–Only six months ago, federal Liberals believed they would be putting Prime Minister Stephen Harper on the run with two big assets: new leadership and the environment issue.

But a new poll to be released this week shows that those assets may now be Liberal liabilities.

The Angus Reid polling firm surveyed more than 1,000 Canadians about their attitudes toward the opposition parties and found simmering trouble for Liberal Leader Stéphane Dion and his party.

More respondents – 37 per cent – thought NDP Leader Jack Layton would be a good prime minister, compared with just 25 per cent who preferred Dion.

Even the old ethics cloud hasn't cleared – New Democrats were seen as honest and ethical by 45 per cent of respondents, while only 24 per cent said they would characterize Liberals that way. Only 28 per cent said the Liberal party had done enough to regain the trust of Canadians after the sponsorship scandal of Jean Chrétien's years in power.

It kind of sucks that Canada should have to rely on foreigners to force us to clean up our act environmentally, but when you're faced with a bunch of recalcitrant cowboys, what else can you do?

Well, Canadians tried to regulate the corrupting, corrosive effect that vast quantities of easy money would have on the sovereignty of a nation of Canada's scale located so close to the most comsumptive market in the world (for now), but our lazy, mediocre elite gave up a long time ago.

Uh, sweetie? a huge proportion of the fossil fuel consumed in the East is imported.

But yes, shut off the taps, please.

When I saw "yes men" I first thought you were referring to the conservcatiave caucus. But you were actually talking about productive Yes men and not traitors like the CPC yes men.

anon, you mean the poll where Dion is behind the other leaders but the Federal Party as a whole kicks connie ass? With about 34% support?

I saw that, whats your point?

The liberal party is not a authoritarian dictatorial party so personal numbers mean little. But Harpoon on the other hand is sinking himself and taking the Connies with him because of his speechless Yes men.

I guess that means -34% chose the Conservatives. Sounds about right.

Deno said...
This comment has been removed by the author.
2:44 PM

"Unfortunately, when "mere" Canadians speak out against the ongoing disaster that is the Tar Sands as it is currently being developed, the folks out in Calgary just don't listen."

They don’t listen because it is not true.

BCL, why don’t you take a trip this summer and visit Ft. Mac to see this “environmental disaster” for your self. May I suggest that you drive, just be extra careful on hi-way 63 so you don't hit any of the plentiful wildlife that cross that hi-way everyday on your way to the tar sands.

Are the tar sands affecting the local environment around Ft. Mac?

If you did this it would personally affect you financially so it is better that you protest about some tar sands that is 2000 miles away and will only destroy the livelihood of people you don't like anyway. Albertans!

STOP CALLING IT GLOBAL WARMING!!! THAT IS THE OLD BUZZ WORD! USE 'CLIMATE CHANGE' INSTEAD AS IT ENCOMPASSES EVERYTHING! Global warming was too limiting. Now we can claim ANY kind of weather as 'evidence' of Anthropogenic Climate Change.