Is Peak Oil Upon Us?

From the U.K. Independent:

Scientists have criticised a major review of the world's remaining oil reserves, warning that the end of oil is coming sooner than governments and oil companies are prepared to admit.
BP's Statistical Review of World Energy, published yesterday, appears to show that the world still has enough "proven" reserves to provide 40 years of consumption at current rates. The assessment, based on officially reported figures, has once again pushed back the estimate of when the world will run dry.
However, scientists led by the London-based Oil Depletion Analysis Centre, say that global production of oil is set to peak in the next four years before entering a steepening decline which will have massive consequences for the world economy and the way that we live our lives.
What makes this analysis more than usually compelling is that, while oil companies may not be prepared to admit the imminent arrival of peak oil to the public, they seem quite willing to admit it to one another. From a recent KPMG survey of oil/gas company execs:
"These executives are deeply concerned about declining oil reserves, a situation they see as irreversible and worsening," said Bill Kimble,National Line of Business Leader, Industrial Markets for KPMG LLP. 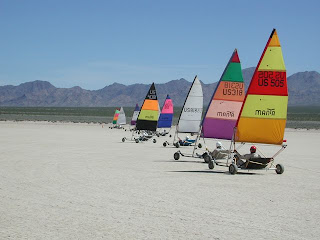 Time to whip out your old land sailor.

I better get to work on my supercharged Holden Interceptor.

Thank you BCL for brining up this topic.

I’ve been reading up on global peak oil for years. I began to get interested in this topic when I first read about Hubbard’s peak. Over the last 5 years there has been more and more evidence that peak oil may have been reached. With the decline of production in the Alaskan oil fields, North Sea fields and recently the major decline of production from Mexico’s largest oil field Cantarell are all pointing to the fact that peak oil is here. The only question mark is Saudi Arabia. The Saudi government has maintain that the can ram up production to 12-13 million barrels a day over the next few years but as Matt Simmons shows in his great book Twilight in the Desert the largest oil field in the world Ghawar is probably already in decline. Since the Saudi’s have absolutely nothing that can come close to the size of Ghawar to develop to replace the loss of production, peak oil is no longer a matter of “if” but “when” we reach it. With the tripling of oil prices over the last 6 years I’d say it is a good bet that peak oil is here.

Peak oil means that oil prices will continue to rise over time and I believe that we are only a year or two away from a $100+ barrel of oil. If you people have trouble swallowing $1.20 gas wait until it goes above $2.00 a liter. Peak oil will change our lives forever. The days of cheap energy are now behind us just when a new huge source of demand is beginning as China and India develop their economies to first world status. Production peaking or declining and demand growing, looks to me like this will be a good receipt for world war 3. I believe that future historians will look at the Iraq war as the beginning of a world wide conflict as the world powers fight over the remaining supply of energy and natural resources.

One last thing, peak oil will do what Kyoto can not, that is CO2 emissions will probably peak over the next decade and then begin to decline as oil production falls and the cost of the remaining oil rises. High oil prices means that solar and other alternative source of energy will be much more competitive against oil and the private sector will begin to invest billion’s of dollars into research and development so they can profit from new alternative sources of energy. The private sector will accomplish what the UN and governments around the world with their idiotic Kyoto agreement could never do, lower global CO2 emissions.

"One last thing, peak oil will do what Kyoto can not, that is CO2 emissions will probably peak over the next decade and then begin to decline as oil production falls and the cost of the remaining oil rises."

Maybe not, some scenarios have us turning to dirtier fuels just to keep the lights on. Transitioning to a post carbon economy would probably be alot easier if it is done in an orderly fashion. Very rapid increases in oil prices might well lead to panic.

Your link doesn’t work. I think a part of it is missing. I am very interested in reading it so could you please repost it.

If oil price explode up in price the scenario you mention may be right. I believe that this will be a short term phenomenon (few years). Peak oil will open the door for the private sector to get in on the ground floor on new energy alternatives. The lust for huge future profits will guarantee that billions will be invested into research and development. There will be hundreds of companies all competing to become the Amoco or Royal Dutch Shell of alternative energy sources. After all, you should never under estimate the human emotion of greed. Greed and the lust for huge profits is what capitalism is all about. When the private sector smells huge profits there is always a feeding frenzy.

Nope. That cuts off too. Two things: the last three letters are "stm". Cut and paste and add those. Or search "peak oil" on this blog and find the link in

Adding the letters STM did the trick.

The article was very imformative and I can't say I disagree with any of it except one part.

Peak oil will absolutely set off some kind of economic collapse but I don’t believe we will see a repeat of the 1930’s deflationary depression. At lease not right away. Back in the 1930’s all the developed nations used gold to back their currencies so the central banks at that time could not fight the deflationary forces of the credit collapse of 1929-32 with monetary inflation (creating money out of thin air).

An oil shock where the price of oil shoots to $500.00+ a barrel in a short period of time would act exactly like deflationary credit collapse of 29-32 because oil is a inelastic commodity which means that most of the oil used today is necessary to our modern way of life. People have to heat or cool their home, they have to drive to work, and trucks have to have fuel to bring food and products to market. Over time people can insulate their home, or buy smaller cars but in the short term there is nothing an average Joe or Jane can do but to use money that they would of used for entertainment, buying new furniture, clothes, electronics and spend it on oil base products. This action of diverting money for other uses so people can buy oil products is very deflationary and a much slower economy is inevitable. The difference between today and the 1930’s is today’s central banks can create monetary inflation (creating money out of thin air) because money is no longer backed by gold so they can counter the deflationary forces that an oil shock would create. What they are attempting to do is monetize the rise in oil prices by increasing the money supply to compensate for higher energy cost. The problem with this strategy is all that new money eventually spills into other markets which set off inflation in other areas of the economy. Once the inflationary cycle begins it is very difficult to stop. In a peak oil scenario oil prices will continue to rise forcing central banks to continue to monetize the rising price of oil by creating even more money out of thin air which set off even more inflation in the rest of the economy. Eventually all this new money creation set the economy on a course to a hyperinflationary depression. I believe that this will be the case because the world central banks have already begun to monetize the rise in the price of oil over the last 5 years.

Money supply figures around the world have shot up over the last 5 years and so has the cost of living. (Inflation)

Virtually all the worlds develop countries have seen their M3 money supply numbers growing annually in double digit percentages in the last year. This annual growth in the money supply is now higher today then the high inflation years of the late 70’s and early 80’s. The US went so far as to stop announcing M3 money supply figures a little over a year ago so the can hide the real growth of their money supply. If I’m right about this then the M3 money supply numbers around the world will continue to grow and the cost of living will continue to rise. This is just another reason to believe that peak oil has already happen and we are already down the road to some kind of economic collapse.

Greed and lust? Oh, you must mean THIS guy!

Hi Deno, really good analysis but what's your thoughts on Interest Rates in response to this see-saw of Deflationary / Inflationary pressures? Do you think we will see increasing volatility and eventually much higher rates and over what period do you think b4 a 'big collapse'?

(A higher cost of living must IMO feed through to inflationary pressures but the deflationary effects of not spending as much on non-oil goods would tend to reduce -I'm still a bit confused in other words!)