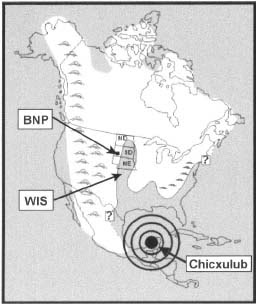 Over 80% of voters in this totally pointless online poll reject the notion that "freak weather events, like the F-4 Tornadoes that hit Manitoba over the past couple of days are being caused by man made climate change. Quite rightly so too, as the connection between climate change and increased tornado intensity/frequency has yet to be established ( I believe. But sorry, no link).

However, it would have been nice if, in a poll allegedly about the facts of Science, the folks at CFAX 1070 who authored the poll question hadn't written something as painfully idiotic as:

No [they are not being caused by man-made climate change]. While these weather patterns seem strange to us, we've only been here for the past few hundred years. Don't forget, the climate is always changing. In fact, 65 million years ago most of Manitoba was at the bottom of the ocean.

Well, firstly, tell all this to the natives, who have been in Manitoba a minimum of 12,000 years, and possibly quite a few thousand more before that. But, beyond 1070's casual racism, the picture top left shows the extent of the "Western Interior Seaway", the "ocean" in the quote above, at the time of the K/T Boundary event (the big asteroid that killed the dinosaurs), 65.5 million years ago.

Note that it stops well shy of Manitoba. Well shy. Not even freaking close.

Posted by bigcitylib at 2:32 PM

Deno said...
This comment has been removed by the author.
9:38 PM

Deno said...
This comment has been removed by the author.
9:41 PM

You know very well that any single weather event does not prove or disprove climate change.

As for tornados in Manitoba, I was born and raised there and I can tell you that tornados were an annual event in southern Manitoba. I have many memories of a family drive to go see some of the damage a local tornado did to the countryside or some of the small towns that dot the Manitoba prairies.

As for the online poll, if it so meaningless why bother to post about it?

Lastly, I have an article written by a venture capitalist names Brain Bloom I’d hope you to take the time to read. The article is about his views on AGW and climate change.

The reason I want you to read his take on AGW is because is not connected to the oil industry. In fact he is one of the private sector people that I was talking about in the comment section of your last post of Peak Oil who want to profit on alternative energy sources.

Instead of posting the article like many so-called GW deniers do here I’ll post a small bio and a peak at his new book instead.


Here is his bio and book info:

Since 1987, when Brian Bloom became involved in the Venture Capital Industry, he has been constantly on the lookout for alternative energy technologies to replace fossil fuels. He has recently completed the manuscript of a novel entitled Beyond Neanderthal which he is targeting to publish within six to nine months.

The novel has been drafted on three levels: As a vehicle for communication it tells the light hearted, romantic story of four heroes in search of alternative energy technologies which can fully replace Neanderthal Fire. On that level, its storyline and language have been crafted to be understood and enjoyed by everyone with a high school education. The second level of the novel explores the intricacies of the processes involved and stimulates thinking about their development. None of the three new energy technologies which it introduces is yet on commercial radar. Gold, the element, (Au) will power one of them. On the third level, it examines why these technologies have not yet been commercialised. The answer: We've got our priorities wrong.

Beyond Neanderthal also provides a roughly quantified strategic plan to commercialise at least two of these technologies within a decade – across the planet. In context of our incorrect priorities, this cannot be achieved by Private Enterprise. Tragically, Governments will not act unless there is pressure from voters. It is therefore necessary to generate a juggernaut tidal wave of that pressure. The cost will be ‘peppercorn’ relative to what is being currently considered by some Governments. Together, these three technologies have the power to lift humanity to a new level of evolution. Within a decade, Carbon emissions will plummet but, as you will discover, they are an irrelevancy. Please register your interest to acquire a copy of this novel at www.beyondneanderthal.com . Please also inform all your friends and associates. The more people who read the novel, the greater will be the pressure for Governments to act.

Fine, change the numbers to 12,000 and 80 million. Does it change things significantly? Nope.

well, the morons at 1070 aren't completely off, as they were probably referring to lake agassiz which covered most of manitoba during the last ice age (wisconsin sheet or whatever...can't remember) and which receded into hudson's bay. still doesn't changew how freackin' stupid that question was.

Did the aboriginals track and maintain accurate weather records for those 12,000 years? To me, anyway, it seems he's referring to weather events and how far back in time we have a record with which to compare. In that regard, a couple of hundred years at MOST is all we've got here in Manitoba. Back before Europeans arrived, Manitoba was populated by a Stone Age culture, which had no idea of what caused weather to change, and believed in unfounded mysticisms that their Shaman made up. Kind of like where we're headed today.