Oh! Ted Nugent, Why Do You Hate Capitalism? 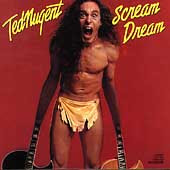 I saw you one time in the early 1980s, in your Wango Tango glory days when you still had hits on the radio and your ear-drums hadn't exploded.
And I remember the night like it was yesterday. I remember how you went by outside the hockey rink in the back seat of your limo, golden mane flying free out the window and a ten foot line of drool hanging off your bottom lip. I remember how you told the crowd in Victoria, B.C .that you had come all this way to "grab yourself some good Canadian PUSSY". And I remember how when you told that joke about smoking just a two-paper joint before the show you added a bit of local color to the punch-line: : "But do you know how much dope you can stick in two copies of the Victoria Times Colonist?" We all appreciated that.
And I especially remember how you swung onto stage on a vine, wearing nothing but a loin-cloth, and how, for those kids brave enough to fight their way to the front of the stage through the Electric Mayhem, it was possible to see you Nads clear as day, blowing in the amplifier wind and well tanned from all those hours of nude tanning under the Detroit sun.
And I remember the music, the transplendent solo in the middle of Stranglehold, and how you finished the evening with a rousing rendition of your biggest hit, Freebird.
Quite a night, all told, and more than worth the buzzing in the ears because, in my case at least, it went away after a month or so.
All of which makes me so disappointed by your latest column in the Waco Tribune-Herald, where you wrote:
I have musical touring associates who have been fired from their jobs with ex-Beatle Paul McCartney for sneaking a hamburger.
You heard that right. Fired for eating meat by an animal-rights maniac, hard-core vegan bass player.
The entire agenda of the gazillion-dollar-financed joke known as PETA literally is dedicated to outlawing meat.
Neither I, nor any hunter or meat eater on the planet, has any desire whatsoever to influence any vegetarian's choice of diet or to force them to eat meat. We are the friendly, tolerant Americans.
And what I want to know, Ted, is when did you suddenly go all Commie, when did you start hating the very Capitalism that made America great? Don't get me wrong, I like a burger as much as anyone, and McCartney turned into a Dork when he bought his Knighthood, if he wasn't one already.
But Goddamnnit, the man is a business-man! His tour is his business. Now, when I go to work in the morning and my boss tells me to wear a suit and a silly tie, I do what he tells me to do. When he tells me to look the door to his office and take my pants off, I do that too, because that's his prerogative as a Capitalist. Yes, Ted, a Capitalist, those people to whom we owe our prosperity and our very Freedom.
So, in my opinion, Paul McCartney has the right to run his own business in whatever way he sees fit. And I'm surprised you would believe anything different, Mr. Nugent.

Posted by bigcitylib at 9:50 AM

I don't think that TN said that he couldn't or shouldn't be alloed to do it, just that he's an asshole for having done it. That's right, freedom means that you can do what you want with you're stuff, and I can ridicule you for it. What's your problem with freedom of speech, eh commie?

why are you taking off your pants for your boss? if my boss told me to do that, i'd kick him in the balls...or at least give him a dead-arm.

However, what Paul is doing is imposing his personal beliefs on others through his business dealings. Let's turn the table. Say Ted puts into all of his contracts, that at some point during your employment, you must attend his ranch and hunt, kill, clean, butcher, and eat some sort of wild animal. Now, how will the MSM and PETA and the ACLU react to this little contractual detail? How about making some sort of religious requirement?

Ted's point is right on. The Left has no interest in allowing people to do what they would wish. They wish to control everyone's lives because they know better. What is not prohibited is made compulsory, the liberal/socialist mantra.

If I had to choose musically, I'd pick Paul.

If I had to choose politically / intellectually, I'd pick the Tedster.

Be as bad and immoral as you want but make sure you get saved before you die.

Its how evangelicals operate, having everyones caking and eating it to. Thats why they tend to be made up of some of the worst crooks, thieves, and liers. Say what you want, then get saved, and then repeat.

Of course he is "imposing his personal beliefs through his business dealings". That's a legitimate way of advancing your personal beliefs in a Capitalist society. Just as you are allowed to use your consumer choices to the same end (by not going to Paul's next concert, for example).

All quite capitalist, which Ted seems to have forgotten.

Oh no, we find many things humourous. Like Dion saying he's better than Harper for Alberta. Or when he says the Liberal Party is the party of convictions. Or when Chretien said anything. Or every promise made and invariably broken by Martin.

Oh no, we find many things humourous. Like Dion saying he's better than Harper for Alberta. Or when he says the Liberal Party is the party of convictions. Or when Chretien said anything. Or every promise made and invariably broken by Martin.

That's the kind of stuff you find humourous?

Not only should Harper attract just the NASCAR crowd, he should attract Ted Nugent and Alice Cooper fans.

Anybody found pictures of Harpo at Richview Collegiate in Etobicoke with long hair yet?

Whatever, ti-guy. You're pretty funny yourself.