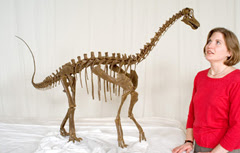 I thought I might write about the no less than three major dinosaur-related discoveries that have hit the news over the past week, but then I thought to heck with it! I'll just link to Darren Naish's wonderful Tetrapod Zoology site, because he does this kind of thing much better than I do. Left is a picture of my favorite of the three finds, a nearly complete baby sauropod skeleton. This sucker would have grown up to be as big as a bus.

I'm going to kick that anonymous's ass so hard his future grandchildren won't be able to sit down.

I'm going to kick 7:39 anonymous's ass so hard that the lump in his throat will be my foot.

Here's a great summation of you leftards.

I like sizzling meat on the grill. Wild, huh? Anybody? Now, we all know ol' Nuge isn't by any stretch of the imagination a weirdo when it comes to an omnivorous diet.

Especially here in the great Republic of Texas, a smiling, drooling preference for succulent, protein-rich, nutritious backstrap over aromatic mesquite coals is as American and natural and right as Mom, apple pie and the flag. It's beautiful, really.

But a culture war rages against such universal, self-evident truths. It would be laughable if it were not so deranged. Some weirdos actually are on a crusade to outlaw the consumption of flesh.

I have musical touring associates who have been fired from their jobs with ex-Beatle Paul McCartney for sneaking a hamburger.

You heard that right. Fired for eating meat by an animal-rights maniac, hard-core vegan bass player.

The entire agenda of the gazillion-dollar-financed joke known as PETA literally is dedicated to outlawing meat.

Neither I, nor any hunter or meat eater on the planet, has any desire whatsoever to influence any vegetarian's choice of diet or to force them to eat meat. We are the friendly, tolerant Americans.

This is but one of many issues that represent the line drawn in the sand between liberals and conservatives.

Our own intrepid opinion editor at the Trib, my friend John Young, doesn't want to simply make the choice to be unarmed and helpless for himself. He has again recently insisted that you and I must also comply with his soulless condition of unarmed helplessness in "gun-free zones."

Nobody from our side wants to force anybody to have a gun or defend themselves. It is us, the conservatives, who are for individual choice.

As for the American left: One hears the words of Mao Tse-Tung come broiling out of the mouths of its heroes, when Ted Kennedy and Hillary Clinton et al unflinchingly push for "redistribution of wealth."

Central Texas' own Chet Edwards has the audacity to support taxing the after-tax life savings of American families following the death of a loved one.

The unfair, un-American, unconstitutional death tax literally destroys mom-and-pop businesses across the land. Think about it.

The wall that once symbolized communism is down, yet some still want to give it a shot. Dear God in heaven, help us.

Meanwhile, right there in that communist country, old Hugo is shutting down an entire media network for daring to challenge his heavy handed, corrupt, dictatorial policies.

This is a leader who has proudly sided with terrorist support groups, and Danny Glover gives him a big hug.

If a Venezuelan citizen were to do so with President Bush, I am confident that Chavez would not respect that individual's right to free expression.

Venezuela gives its citizens no right to free expression. Glover must be blinded by the trees in that forest.

Examine the agendas of the liberal "party of peace." Its members clearly don't believe you and I are smart enough or capable of making our own choices in life.

While conservatives "live and let live," the left arrogantly thinks it knows better than we do and will burden "we the people" with more government control until we are taxed to death.

Educate your family, neighbors, friends, co-workers and hunting buddies on how dangerous such control is against the American Dream of individual pursuit of happiness.

Throw off the shackles of government-run slavery. Stand up for individual independence. Enough is enough.

You're watching too much American teevee anonymous 10:50. And your references are stale. Christ, we were laughing our heads off at the cretinous Ted Nugent back when I was in grade 9.

You're forgiven if you're one of Kate's North Dakota fans.