American Teabaggers Running Out Of The Tea Of Fury? 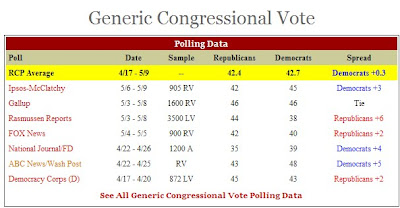 RealClearPolitics maintains a poll of polls for such things as the POTUS' approval ratings, Congressional job approval and, above, the Generic Congressional Vote. Bottom-line: for the first time in 2010 the Dems are ahead. Albeit slightly, and albeit generic congressional polls tend to underestimate (it is said) GOP support. But a far better result than Republicans up 3.2%, which was the story a month ago. I'd guess on this basis that the GOP makes gains in both houses this November, but manages to capture control of neither.

Posted by bigcitylib at 3:58 PM

Email ThisBlogThis!Share to TwitterShare to FacebookShare to Pinterest
Labels: GOP vs. Dems, Teabaggers

The Democrat's will not lose any seats this November!

The Democrat's will be lucky if they lose only eight Senate seats and hold on to the House.
It will be the biggest Republican gain since 94. Just ask James Carville.

Didn't say that. The Democrats will lose seats, but not their majority, in either chamber. That's my prediction.

Damn Rotterdam is back.

Truly one of the stupidest human beings on the planet, probably only eclipsed by Canadian Sense.

Rotterdam dumber than bubba? Wow, that is saying something.

In Rotterdam's favour s/he isn't prone to passive aggressive spazzouts like Jim and some others, nor the drunken confusion of Fred unfortunately From BC.

Well here is a top ten list of the
biggest morons, and assholes.

I listed CS twice, because i felt she merited it, but in all honesty that fuckhead could have taken all ten spots.

The rest of them are not listed in any particular order, they all have varying degrees of stupidity.

Fred from BC, has a major drinking problem. Jim I swear is on LSD, before he always sounds like he is hallucinating.

The rest of them I am not to sure about. From the amount of time Wilson spends on the Internet, he is obviously a desperate and lonely pimply faced virgin.

Canadian Sense is a glue sniffer, nobody could be that incoherent, and not be sniffing glue.