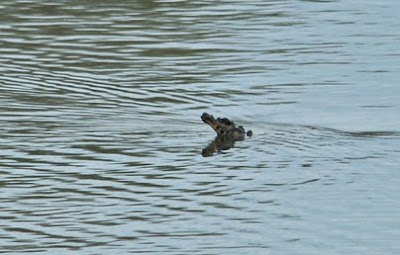 Some inconsiderate hominid, some stinky monkey with enough filthy lucre to purchase--but not enough patience, intelligence, and yes manliness to understand the noble reptile that had fallen into their care--has dumped a pet crocodilian into a large pond near Barangas On The Beach outside of Hamilton, Ontario. Probably not long ago, either, since a creature that size (1 to 2 meters) could not survive even a mild Ontario winter and the weather's only recently warmed-up enough to enable a successful release.

In any case, the Hamidile is likely to be a representative of one of the species noted in this quote from the croc site.

Spectacled Caiman, Caiman crocodilus, has been most popular and helped in million dollars trade. Changes in the law in US and the increased availability of better alternative species, have reduced their demand.

Now Dwarf caimans are most popular because they are easily available and are in small size. African dwarf Crocodile is also becoming popular. American Alligators are also widely available but it is very difficult to keep them as pets.

If you look at the picture--while its hard for a non-expert like me to guess the species--the strongly contrasting light and dark marks on the jaw suggest a juvenile.

(Although, given the probable length, even though its sub-adult it would still be big enough to eat your chihuahua if your chihuahua strayed too close to the pond's edge. But then...think about it...you could buy a real dog.)

In any case, good luck to Bry Loyst, of the Indian River Reptile Zoo, who is trying to rescue this glorious and yet misunderstood creature.

And, just as an aside, while I've never eaten gator meat, I've supped on Alligator once or twice. Tastes like chicken, as most everything does when you really think about it. Not that this has relevance to the situation with our poor Hamidile. Yet. But what if no zoo will take him?

PS. This will probably be it for writing today.