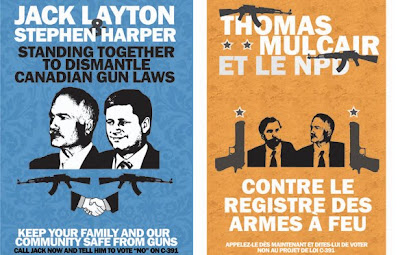 Posted by bigcitylib at 4:25 PM

They should have depicted guys in hoodies firing the AKs into crowds of women and children - really make the Con 10 percenters look amateur.

Jack Layton and Stephen Harper.. standing together to stop a pointless waste of taxpayer dollars.

The Liberal Party of Canada:

Formation and operation of a gun registry that makes no one safer - $2 billion set up and $80 million per year;

Formation and operation of a National Daycare program that will further alienate children from their community and assure that parents can assume even LESS responibility to be parents - $2 billion per year;

Moving Canada ever closer to a fascist State where everyone will depend upon the government for everything: Priceless

(Does "priceless" mean the same thing as "completely devoid of value?")

I hope they do one for Paul Dewar's riding too!

A great many letters over this. on CBC online...as if the NDP have never run down the Liberals every chance they get! Tit for tat

Still not as good as the classic "Libranos".

Don't forget to send it to all these folks:

"Jack Layton and Stephen Harper.. standing together to stop a pointless waste of taxpayer dollars."

Yes. Solving crime is a TOTAL waste of tax dollars. And no one feels safer when a crime is solved.

Can Fred the drunken fool from BC, be far behind.

Jim the "I have a wife you know as in real woman" spazzout creep.

Empty headed morons, the three of you.

You know that the Young Liberals are quite useless when this is all they can come up with....

It's too bad that Iggy is such a dud of a leader... how's he polling at the moment? At this in spite of all of Harper's fuck ups...

A third of Jacks caucus are MPs for rural ridings.

I see from that list, Libs have 1 (one) MP west of the Ontario border, and 3 Danny boys.

Hey, if you're going to attack at least try to get the facts straight there folks. The registry costs only $3 to $4 million per year now.

What's really disturbing is that those opposed to the registry can't be mature enough to compromise? What the hell. Ignatieff proposed taking the criminal element, etc. out of the registry. If they can't grow up and be adults about it, it says a lot about the mentality.

They even mock about sweeping crime - ah, every death/domestic violent act doesn't mean anything to them.

More evidence the women don't matter
Maybe you can get Iggy to whip his party for certain votes then - or should I remind you of the debacle that happened last month? I'm sure that you forgot all about C-391....
What? That was different then? I'm sure that Liberal apologist will say that was different, because it always is...


As for facts, the NDP supports the long gun registry, some of their MPs don't and seem to be voting for their constituents. Talks about a concept, actually representing your voters...


So RuralSandi, while you seem to like lecturing, maybe your party could get it's shit together...


As for the produced posters, what an amateurish job....
Since they don't identify who is producing them, I wonder about the legality.
And the message "call jack" is all fine and dandy, but you'd think they would actually include contact information....

Oh here we go. Cherniak WTF's been in hiding for a while, but an opportunity to push his hate for Iggy has brought him out from under the rock again.

"...at least try to get the facts straight there folks. "

If you're concerned with facts, why don't you start by addressing the topic of this post, which is a poster suggesting that the NDP is going to help repeal the registration of assault rifles and handguns?

Once again Rural slips into "but the Connies" and "but the NDP..."...
I just love partisan hacks, they are so ridiculous and easy to mock...

The Liberals messed up on C-391.
These little posters made the "youth wing" are just poor. I mean really poor and amateurish, so in a way, they echo nicely the Liberal Party.


Like I've often said, how bad a leader to you have to be to be behind Harper in the polls after all his fuck ups?

Lenny - a person stating an $80 million annual cost to keep up the registry when it is only $3-$4 million is important. Trying to twist?

Like I've often said, how bad a leader to you have to be to be behind Harper in the polls after all his fuck ups?