If you ever liked Nickelback, you can stop now: 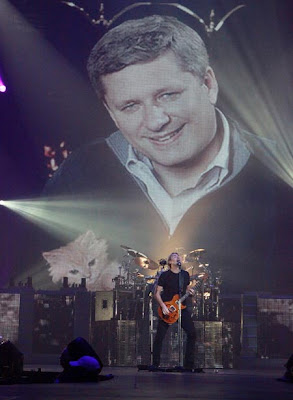 Nickelback is to rock what the Leafs are to hockey; they make tons of money even though they suck.

Posted by bigcitylib at 9:28 AM

If all you can bitch about is the PM going to a concert, Canada and Canadians must be very fortunate to have a leader whose only fault is his taste in music.

Prairie Kid - that's only one of many things that can be bitched about Harper.

Family values? Harper and that group of no talents?

Does Harper actually listen to them or is it all about photo-ops for his western base.

Does he really like the idea of kids listing to these creeps?

Someone, send their music to Charles McVety fast.

"If all you can bitch about is the PM going to a concert..."

Can you read? If yes, then I refer you to the many other postings on this blog where many people bitched about many things...

Oh, and it's nice to see our Prime Minister has so much in common with teenage boys. That might explain why his party enjoys all those juvenile antics during QP.

Was McVety at the concert? Just curious...LOL

Harper is 3 years older then I am. I wonder what he was doing the night I dropped acid with a friend and we saw Iggy Pop for the first time? Nickelback? Gawd. Open up and bleed, Fatboy.

The culture of hypocrisy is alive and well in harpercrite land. I wonder if his church basement supporters in small town Alberta would approve. Maybe the Libs have new territory to explore.

The tories are always blowing and sucking at the same time so his concert visit was just a re affirmation.
Parnel

Nickelback is to rock what the Leafs are to hockey

Sadly true, but not a nice thing to say.

"If you ever liked Nickelback, you can stop now:"

And Prairie Kid, unless you are still in utero, you probably don't have the life expectancy to hear me out on my bitchs about the Harper that thinks he is the President of something - maybe the Fourth or Fifth Reich and the imam of the Canadian Taliban in his spare time!

I guess that's okay ... as long as they put up a picture of Emmanuel Goldstein before that.

Maybe while they played "Leader of Men" or something.

I'm a Habs fan and even I think you owe the Leafs an apology for that comparison. I mean, yeah, the Leafs suck, but comparing them to Nickleback? Ouch.

Anyone of you even consider the possibility of Brother Steve having approved the song list before the concert? We shouldn't be surprised, really, as that is exactly what an anally retentive, type-A, control freakazoid who controls the agenda would do.

But yeah, someone notify Charles McVety; perhaps it's too much to hope for that relationship to be severed because Steve had a moment of weakness and corrupted his kids?

Nickleback--appearing soon at an IHOP near you, performing with Kid Rock in a Sunday-mornin'-comin' down-hard brawl. Steve acquired his taste in music from the same place he got his economics degree, a Cracker-Jack box.