Recent records of the ocelot (Leopardus pardalis) are indicating they are being newly seen in northern Mexico and in Arizona. There is evidence that they are extending their range much farther north than in past year

Taken by a remote camera, this remarkable photograph is the first verifiable record of this elusive wild feline alive in Arizona. Although a small number of ocelots live in south Texas, ocelots have never before been recorded alive in Arizona. Additionally, this record from Arizona places ocelots over 200 miles north in latitude from where they are found in Texas.

So, ocelots are joining the Northward march of species. I've written about Northern Mockingbirds a couple of times. Here's a graph of their numbers observed over the last few
Toronto Ornithological Club's Xmas Bird Count. 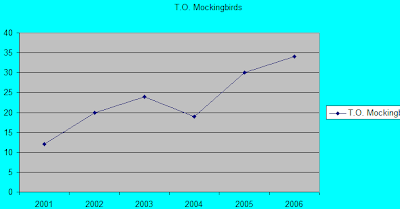 Mind you, this is a one day count, so only a fraction of their total numbers, which if I am remembering correctly is about 500 pairs in the GTA. Common enough now that the local birding shops have begun referring to them as native. They're charming little birds in ones and twos; in numbers they become a bit of a pest, with the unpaired males singing endlessly through the summer nights.

Mind you, I'm not sure these guys have any redeeming qualities, and since a neighbor of mine claims to have seen one around Lawrence and Warden, we can assume they've spread East from Mississauga. Like everyone else in Miss., they probably got bored.

Oh, and then there's the pythons moving North too. I love snakes, so I say bring 'em on, but for most folk they're just another thing that's gonna eat the pet chihuahua.

Well, maybe the pythons can do something about the Kudzu heading towards Ontario, according to U Toronto researchers. Canadians will jsut love that stuff...

I just don't want BIG, warmth loving, roaches. our winters used to protect us from the superior species, but now?