Iggy's Been Working Out 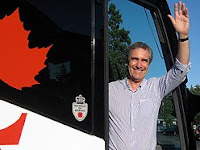 I've written once or twice about how Iggy should exit his summer tour physically: should he sport an Alberta beer gut, thus appealing to Der Volk and maybe making inroads into the Tory strongholds out West, or remain lean and efficient like the Eastern Liberal Hawk that seems to be his default setting?

And I'm proud to announce that it looks like Iggy's managed a classic Liberal compromise: nobody would dare call the man a scrawny elitist, but there's obviously a rowing machine at the back of that bus.

And he's been filing his fangs back a little, so as not to hurt anyone when he's baby-kissing. That too is good.

Victory will surely be ours.

Email ThisBlogThis!Share to TwitterShare to FacebookShare to Pinterest
Labels: Iggy On The Move, Iggy The Magnificent, O Glorious Iggy