Dennis Bray and Hans von Storch have been surveying climate scientists for years in attempt to identify exactly where climate science as a whole stands on the questions surrounding AGW. Unfortunately, earlier surveys were freeped by denialists, and large scale surveys like this are problematic even when not sabotaged. For example, the authors say of the rating system used in their survey:

Figures provide descriptive statistics for all variables contained in the survey. Most survey questions were designed on a seven point rating scale. A set of statements was presented to which the respondent was asked to indicate his or her level of agreement or disagreement, for example, 1 = strongly agree, 7 = strongly disagree. The value of 4 can be considered as an expression of ambivalence or impartiality or, depending on the nature of the question posed, for example, in a question posed as a subjective rating such as "How much do you think climate scientists are aware of the information that policy makers incorporate into their decision making process?", a value of 4 is no longer a measure of ambivalence, but rather a metric.

That said, the survey is filled with suggestive if not conclusive material. For example, on the performance on the IPCC: 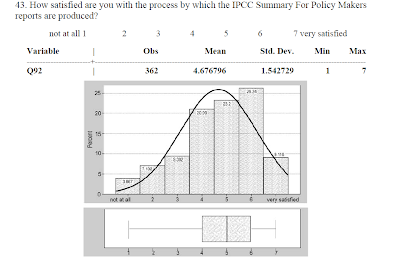 "A passing grade" would be my interpretation of that graph.
On the performance of journalists covering the topic: 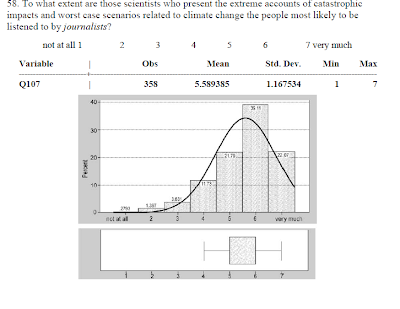 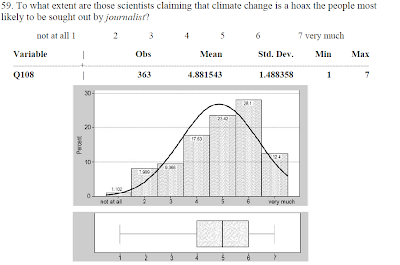 "Generally speaking, crap" would be my interpretation of these two graphs.
PS. The other beef I have with the survey is I don't see any comparison their earlier results.

Posted by bigcitylib at 9:56 AM

A judgment of the media's performance needs to take into account the government's muzzling of scientists:

"...The Gazette unveiled a leaked EC memo boasting that requests for media interviews on climate change have plummeted 80 per cent since the policy was effected..."