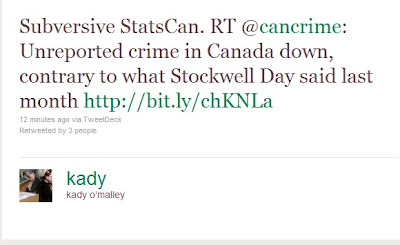 And of course she's referencing to 2009 General Social Survey: Victimization, where it is written that:

For the eight crime types covered by the 2009 GSS on victimization, the proportion of incidents reported to the police by respondents fell from 34% in 2004 to 31% in 2009.

Except that, I think she's wrong about this being contrary to Stockwell, for if the proportion of incidents reported goes down, that means the number of unreported incidents goes up. Which is what Mr. Day seemed to be suggesting.

For an account of earlier rounds, read this. And, mind you, this still doesn't justify building more prisons as unreported crimes are by definition ones in which the criminal was not brought to justice.

Posted by bigcitylib at 8:57 AM

Interesting. I think the key point here is that the victimization rate did not go up, that violent crimes are still reported at the same rate they were reported in 2004, and that the crimes that are now reported less are offences like car theft, and theft of car parts.

I think Day was trying to suggest the crime rate is actually going up, and that the unreported crime rate would support his theory, however clearly it does not.

Further, the crimes where reporting rates went down are less likely to result in jail sentences anyway, so his comment becomes even more non-sensical than it already was.

I have read these surveys before, and in the past the reason most people gave for not reporting crimes was that they were not serious enough to involve police. Also interesting to note people are not particularly scared of crime, despite the conservatives' best efforts to convince us otherwise.