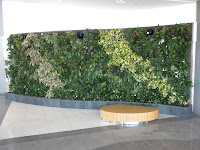 The G&M, bless their hearts, has provided a .pdf giving a detailed breakdown of the federal government's spending on the G8/G20 summits. There's lots of stuff there to pick over, but I thought I would concentrate on a single item from the report-- just touched on in The Globe article--that Greg Weston mentioned previously in one of his columns.

One of the columns he wrote just before Sun Media allegedly sacked his ass down the highway for telling too much truth about wasteful spending at the twin summits.

I'm talking about The Living Wall, the Harper government's "signature environmental project", according to their tender, at the G8/G20 summit. In other words, the project that was to serve as the government's major statement on the environment at the summit, to serve as a symbol to the G20 of Canada's commitment to a cleaner, greener planet.

First off, both Greg Weston and I were both wrong about the nature of the wall: we thought it was an immense shrubbery. But if you look at this release (and this release) from The Direct Energy Center, where the wall was eventually installed, you realize that it is in fact one of NEDLAW Living Wall Inc.'s vegetal biofilters (picture top left), which use ( paraphrasing from Nedlaw's description) lush, green plants and beneficial microbes to create better indoor spaces by cleaning the air with the same processes that nature uses every day.

I will leave it to my readers to decide whether a quarter million is too much to pay for what, while an interesting and unique piece of technology, is very much like an organic HVAC unit. For myself, the problem is more the reverse: conceptually, the project seems the result of thinking small. This was supposed to be, after all, our "signature" project for the entire summit. Supposed to be Da Bomb, the Pièce de résistance, in other words.

And in the end more money was spent on car rentals.

Posted by bigcitylib at 6:02 AM