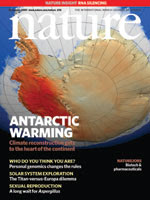 A couple years back, Eric Steig published a paper showing, contrary to much previous work, that Western Antarctica had in fact been warming over the past several decades. Jeff Id of The Air Vent ( one of the guys close to the center of the CRU Hack), as well as several buddies of his, threw together a response which has made it through peer-review. It's called Improved methods for PCA-based reconstructions: case study using the Steig et al. (2009) Antarctic temperature reconstruction and, guess what?

Eric Steig even shows up in the comments to congratulate Jeff and Co. on confirming his basic result Here:

I appreciate also Ryan’s comment that “I would hope that our paper is not seen as a repudiation of Steig’s results, but rather as an improvement” and his emphasizing that their results (evidently) back up our most important point – -the significant warming West Antarctica.

Jeff: (and Kenneth Fritsch): Given that you guys have apparently demonstrated much greater warming that we found (!), in the most critical area glaciologically (the Amundsen Sea embayment), I’m afraid you may well find that the media you complain about will indeed emphasize the red even more than last time...

"But wait! This is denial-land!" you say: "They must have something to bitch about...you know, hiding the decline and the great AGW Hoax and all that!"

Well, its true that the new paper shows a pattern of warming somewhat different in degree and extent that Steig's, and purports to have identified a couple of methodological problems in the original that ought to be corrected. I will leave the scientists to figure out whether these are substantive issues or quibbles. But what's really set off the denialist crowd isn't the substance of the paper itself, but (as hinted at in Steig's second quote)...wait for it....the colour scheme used by Nature to illustrate the paper on its front cover (see above). McIntyre is outraged...OUTRAGED!

In the Nature article, the lurid blotch of red over the Ross Ice Shelf and the land area abutting it (where Harry is located) was prominently featured. Now Steig says that this doesn’t “matter”.

The S09 authors never said the Antarctic will melt but the implication to the layperson was ‘big red plot’. Now the plot has an appropriate amount of blue but if I recall there were many dozens of mainstream papers which carried the ‘red’. Can anyone guess which mainstream papers will carry the ‘blue’.

Gawd! The sheer genius of these guys! They're not just scientists up to the level of Galileo, they do graphic design as well!

Thanks for the clear and well understood review of the paper you haven't even read.

Very good article thanks for sharing energetic information. I really appreciate u . You need to work more to promote your website. I read blog on daily base.
best buy security cameras installation

We have many different bus and coach options available for hire. Take a look at our fleet information page to learn more about which is the right transportation for your needs.


If you are looking for Safe and efficient charter bus and shuttle rentals in Canada then you are on right place. YTI charter provides cheapest Bus rental services.
bus to toronto