The Pre-History Of Xmas: In Which Santa Flees Turkey With A Gang Of Midgets 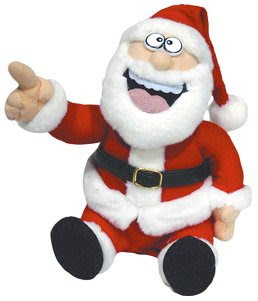 (Note: this is a shameless rehash of something I wrote way back in 2006. However, I think its just as relevant today.)

Saint Nicholas, the inspiration for Santa Claus, was known for his fascination with children and prostitutes. In the "official" stories, these interests are described as being entirely innocent. For example, from The Lifesite:

"Legend has it that Saint Nicholas became aware of a desperately poor parishioner having three daughters with no dowry to recommend them for marriage. The father had planned to sell them into prostitution to provide some means of support. By night, Saint Nicholas secretly brought bags of gold on three separate occasions to the man's home. These generous visitations allowed the three daughters to have sufficient means to avoid whoredom and later strike a marriage covenant. On the third visit to deliver the gift, Nicholas was caught in the act of generosity by the grateful father."

But I once met a guy high up in Jesuit Order who knew the whole secret history of The Church, and he explained to me that this account was a total white-wash. If the truth had come out, Nicholas could have never been made a Saint. The real story is that for two nights Mr. Nicholas snuck in through a handy window to consort with these three vice girls, but on the third night he slipped on roof tiles and fell into some hedges, thus waking their old man!

And of course the girls' father was grateful! He got three bags of gold out of the deal. They were his payoff, his hush money!

In fact, father and daughters were in cahoots. The aforementioned marriage covenant was struck with Saint Nicholas himself, because daddy threatened to squeal him out in public. So Nick wound up living with with the gals Mormon-style, and in folk-tales they became known as The Brides Of Santa.

Nick was content with his lot, for the Brides bore him a whole gang of dwarf children, seven or eight of them in fact, including Grumpy, Smarmy, Sweaty, and Sleazy. But people got wind of their arrangement, and they fled Turkey with a torch-wielding mob on their ass. Eventually the whole motley crue landed up at the North Pole, which was pretty much parts unknown back in those days, and in any case ruled over by the loose living Swedes, who could be counted upon to look the other way with regards to the behavior of this rich bigamist and his midget clan.

Just to be safe, however, St. Nicholas grew a white beard, packed on a few pounds, and started calling himself "Santa". He made his kids shave, floss, and dress a little better, and started referring to them as "elves", which is the Viking word for "little white guy", in an attempt to compensate for their rather swarthy complexion.

So now you know.

Don't have any joy this Xmas. Remember, there's kids starving in Malaysia.

you forgot your 'Liberal War on Xmas' label, Comrade.

Argh! Did someone leak the relevant Church documents to Wikileaks while I wasn't looking?

This is at least as convincing as the official version.

Thanks a lot for everything, I love to read about such novelties, a revelation!
Create a video, greetings from Santa La lettera di Babbo Natale

A Voice NOC Technician handles assignments related to the voice application systems and voice network, including designing, planning, developing, testing, deploying, and maintaining them, and supporting their associated hardware and software. It is the responsibility of Voice Network Technicians to ensure that Voice over Internet Protocols (VoIP) are working efficiently 24x7 by troubleshooting issues.