Somebody's been smoking too many chickenshit cigarettes, I think. From CTV:

The Saskatchewan Party is outraged that as the words Privatization of the Crowns dissolve in one part of the ad, the letters P, O, R, and N stay up a second longer than the rest.

Of course, Kate wants in on the ground floor of the madness. But here's something to consider: Saskatchewan is hub city for Canadian bigfoot sightings, and the Saskatchewan Party shares the first three letters of its name with the native Indian name for bigfoot, "Sasquatch". What 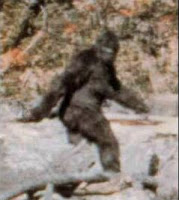 does that tell you? Huh? HUH? And don't get me started on Saskatchewan and crop circles. Somehow they fit into the whole matrix. And did I just mention The Matrix? Oh My!

Posted by bigcitylib at 5:28 AM

This is what CTV thinks is news? Meanwhile, the appointment of nekkid mayors by the CPC to usurp the authority of elected MP's goes unremarked?

Lord, they can't even do sensationalism right.

NDP slogan: We'd rather be dictators, but we don't have all the guns - yet.

The Saskatchewan Democratic Action Party response to the above ad:

Saskatchewan Democratic Action Party Response - Can you spot the wolf?