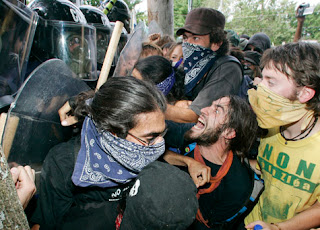 As of 7:00 AM, 318 stories related to the three dodgy anarchists at Montebello. Were they police officers undercover? Contentwise, we are left in the somewhat unsatisfactory state wherein David Cole's presser seems to have rehashed what everyone already knew (Those crazy boots!). Bad-Press-For-The-Harper-Governmentwise, things are ticking along nicely.

Having now seen the video with sound working, I am sure these clowns were not of the crowd. It is only the pure "stupid" factor that makes me question whether or not they were police. As retired officer Doug Kirkland noted:
More aggressive protesters closer to the hotel entrance were met with pepper spray, tear gas, and plastic bullets in the late afternoon. But a sanctioned operation wasn’t obvious to Doug Kirkland, a retired Ottawa police officer who worked several protests and viewed the YouTube video.
The trio could have been “rogues” or private security personnel, he said. “Honestly, I can’t imagine any police officer who’s in command putting three more mismatched people into that situation,”
Kirkland said. “You don’t take people who are well-fed, muscular, and that much older and think that they’re going to blend in. It’s stretching the bounds of credulity a bit.”
(OT, but,like, what are they feeding college kids these days? I have to say the protesters at Montebello were one of the most pathetic displays of young man-hood I've seen in a long time. And could the Youth Of Today lose those stupid beards? You look awful. Even if your momma won't say so, she thinks it)
The other point to note is that whoever gave these three faux protesters their boots also appears to have issued matching bandannas. Tour the dollar stores of Montebello with a few pictures and you can probably get a positive ID.

Posted by bigcitylib at 6:39 AM

Always with the conspiracy theories. You neo-coms will believe absolutely anything. 9/11 was an US plot. Moon landing was faked. Kennedy was killed by CIA. It just never ends with you people. Everywhere you look you see Vast Right Wing Conspiracies. Were all violent protests the result of A-Ps? Paranoid & delusionsal; the Liberal Party of Canada.

Vast Right Wing Conspiracies are not believeable becaus Vast Rightwingers don't have the brains to carry them off. Sending three dorks into a crowd to throw rocks? That, they could manage.

I think seeing a pathetically sloppy "operation" to "spice up" security activities by the mounties hardly qualifies me to pull out tarot cards to seek ships in the bermuda triangle, or any of the other crap you mentioned.

But it does make me think a little less of our police. I'm sure many others feel the same.

joseph: How did the RCMP get into this? I was under the impression the police involved were the Quebec provincial variety. The RCMP were on the inside guarding the actual participants.

Still won't hurt the Conservatives. "Me I put pepper on my eggs" sure didnt.

you are correct - my apologies to the RCMP for mistaking them as being involved (with this).

Now about recognizing police sloppiness at attempted entrapment equating to a belief in vast conspiracies . . . an apology forthcoming?

Or are you the other anonymous . . . you're so hard to tell apart?

Vast Right Wing Conspiracies are not believeable becaus Vast Rightwingers don't have the brains to carry them off. Sending three dorks into a crowd to throw rocks? That, they could manage.

My thoughts exactly. The neocons can't manage real conspiracies because they all lie so damn badly. But, as evidenced by all their stinky little crimes and misdemeanors, they are, as a whole, ethically- and morally-challenged.

I'm not interested in this story anymore until the SQ explains what happened to the three it detained.

I agree. Rightwingers can't lie nearly as good as leftwingers.

BCL — You have a label for "beards"? That's too funny.

Sorry...I didn't make it to the methadone clinic today and I'm a little out of sorts.

New Montebello wrinkle up at my place.

Conspiracy theories . . . . moonbat Dion must have sent these clowns . . . . they were dressed in their best marxist garb . .

BCL, I am sure you can provide factual information for the rest of us directly linking this to the CPC. If not, it would be proper to change the name of the post to something more accurate. Unless you believe that the CPC can order the QPP around.

Well, Kingston, it happened at an event hosted by a PM who was a leader of the CPC. More detailed connections will surely emerged in the fullness of time. It is so sad that Stockwell Day has chosen to cover up:

The police admit the three were Surete du Quebec officer.

Actually the summit was hosted by the Govt of Canada, not the CPC, yes they are the government wither the LPC wants to admit it or not, remember that little democratic exercise back in Jan 06 I believe it was. Now back to my point, to you have any direct evidence that the Tories directed the QPP to do this. If not, it is the QPP and Liberal Party of Quebec who has some explaining to do.

PS. Can the govt of Canada even set up a public inquiry concerning the QPP, as the NDP is asking, it would seem to be totally outside of their jurisdiction, I can see them maybe asking the Quebec Govt to have one, but I do not believe they can do it on their own with out stamping on a lot of provincial toes.