Alberta, Albion Of The Frozen Tundra

In which the Stelmach government uses photos of England in its Alberta re-branding campaign.

Apparently, they were trying to show off Alberta's beaches, and used a shot of Northumberland.

Culture Minister Lindsay Blackett says he can think of a multitude of vistas that could have been used in the campaign, but he adds that it's not his problem to fix.

For example, here's one of Alberta's most famous beaches: 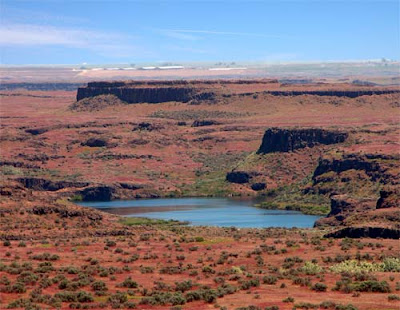 PS. If you're planning a vacation, I think its called "Scab Lake".

PPS. Here's a picture of the beach in Northumberland. Apparently, it was used for its symbolic value rather than location.

A spokesman for Stephen Harper, the Prime Minister, said: "The picture used just fitted the mood and tone of what we were trying to do.

Maybe build a beach beside those massive toxic pools of sludge?

You can't swim, but you can bird watch!

David Sands from Public Affairs Bureau, Government of Alberta:
BigCityLib, we dropped the ball. The image wasn't supposed to be used in a representation of Alberta. Its context was in our regard for other people, other places. Then we used it in a very different context, with the word "Alberta" on it.
We're sorry. Here's an apology: http://www.alberta.ca/blog/home.cfm