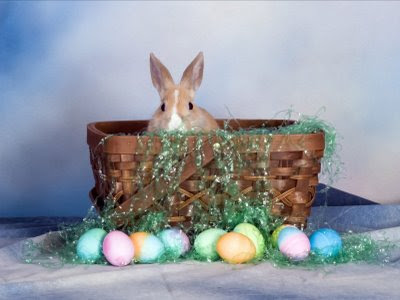 How did you even get associated with the death and subsequent resurrection of Jesus anyway? Pretty sure there is minimal bunny presence in the Bible.

I put an end to the E-Bunny farce this morning by telling the kids I had mistakenly shot him last night when I mistook it for a burglar! A few tears were shed by the youngest (the eight year-old) but after 13 years of perpetuating this absurdity all four kids eventually agreed this pagan ritual should be abandoned. Now if I could only figure out a way to frag Santa next December!

Come back around Xmas. This place rocks with Anti-Santa sentiment.

Easter celebrations, like those at Christmas, are rooted in pagan rituals. The whole Ishtar thing, right down to coloured eggs, predates the Christian era by roughly 1,500 years. The name is believed to come from the Saxon goddess of Spring.

Christianity showed up but we didn't see any reason to ditch two perfectly good parties so we pasted Christian connotations to them. Now go out and eat that damned chocolate lagomorph!