Two days ago, we noted a picture issued from the PMO showing Mr. Harper allegedly speaking over the phone to U.S. President Barack Obama that seemed rather suspicious. 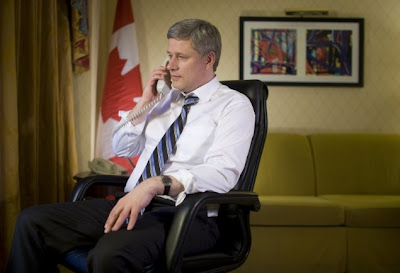 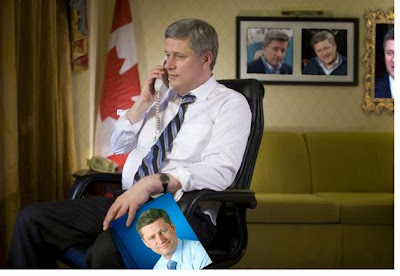 A couple of key points:

1) Most notably, the fake Harper is too thin, whereas the real Harper possesses an upper-body that seems fuelled by anabolic donuts.

2) The real Harper is clearly talking on a phone to nowhere. My source tells me that there is an aide to the PM crouched behind that chair, whispering in a low, mellifluous tone: "Yes you Can, Mr. Prime Minister, Yes you Can!!

3) The real Harper has been known, when travelling, to remove whatever art work decorates his hotel room and replace it with pictures of himself. My secret war-room source tells me that these pictures have themselves been "shopped", to make Mr. Harper appear thinner.

Thanks to secret source and h/t Imp.

Posted by bigcitylib at 4:51 AM

Some of us don't consider this a negative.

I find, for example, Obama's buff bod intimidating, and feel it places unrealistic expectations upon me to eat less muffins.

Odd... I would have expected at least one George Bush photo on the wall.

Hey Harry (Garth Turner blog troll) - if they didn't act like kids, they wouldn't be treated like kids.

The only Harry I've seen trolling was Harry S on Garth Turner's blog and he's a real beaut.

I doubt they're the same guy.