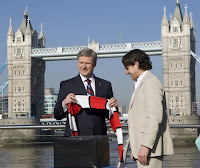 The news is just coming over the tv, and has not made any on-line print sources(whoops: here it is!). But: Harper, missing a photo op? What gives?

Rumor has it he strangled this poor guy with his own scarf yesterday, and has been in hiding ever since.
Which wouldn't surprise me at all. Note how he is smiling in this picture. If you ever see Stephen Harper smiling at you, run, man, just run.
For example 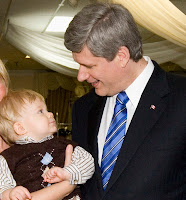 , this picture was taken at a Tory fundraiser. Look at Harper smiling. A second later, he bit that kid's head clean off and ate his brain before anyone could move. That's just how he is.