Here's Victor Davis Hanson, well-known Conservative pundit and Senior Fellow at the Hoover Institution, trashing the theory of AGW as refuted, a hoax, an elitist religion, a whatever...doing what he normally does, in other words. Just an example:

...the assertion of manmade climate change met a perfect storm.

But here's Mr. Hanson as his alter-ego, on the advisory board of Californians for Population Stabilization, a weird anti-immigrant fringe group... 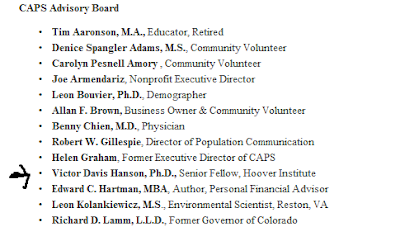 ...who are running ads blaming immigrants for California's rather large carbon footprint. So which is it, Mr. Hanson: is Global Warming a commie hoax or the fault of dark-skinned interlopers? It can't be both.

Posted by bigcitylib at 4:51 PM

I'm not actually going to follow the VDH link. All I want to know is this:

Does he compare the situation regarding to AGW (as he sees it) to the Peloponnesian War? Because that might just be worth reading.

Can't quite follow the logic of your point on this one, 'BCL'. What the ad is saying is that if *you* worry about carbon emissions then here is a cause of some of them. It does not follow that Mr. Hanson shares your worries. Actually, he shares his indifference to such matters with Vice President Al Gore, a man with so many mansions he has to conduct a stock-check each month and uses a private jet to get round and count them all, trailing a gargantuan carbon trail behind him!

And before anyone starts, I haven't a clue whether the accusation in the ad is true or not, and I care even less.

Yes, Terrance. In both cases musclely young men wind up running around in their underwear. A good thing, perhaps.

Last I checked, VDH compared everything to Athens vs. Sparta.

If only we could solve AGW with a giant toga party. BCL, you can be Diogenes of Sinope.

I'll be a very dour Thucydides. It goes along with my "people suck" philosophy.

Duff, I heard you were dead. Still playing silly bugger though, eh?

"Last I checked, VDH compared everything to Athens vs. Sparta."

Right. Where all the guys ran around in their underwear. See The 300, which Hanson said was a classic.

Can't quite follow the logic of your point on this one

Duff: What BCL is showing here is that VD Hanson will use any argument convenient to his political goals, which is discreditable.

Another lesson in wingnut ethics.

No wonder wingnuts believe that AGW is is hoax. As VDH demonstrates, and duff helpfully corroborates, wingnuts don't see anything wrong with promoting a fraud for their own gain.
I wonder what duff does for a living? Nigerian email scams maybe?
Oh well, we'll find out when all of his emails are made public.

Bill Clinton speaking to the annual Gridiron Dinner as a stand-in for President Obama noted he was speaking on the night before the start of spring, “otherwise known to Al Gore as proof of global warming.”

"Duff, I heard you were dead"

No, no, I stand here, well, totter, really, as a monument to a socialist health service but with the prospect of facing a 'death panel' some time soon. (Well, really, there's no need to cheer!)

I wonder what duff does for a living?