More On the Adventures Of The IOP

Ever since the once respected Institute of Physics issued its wild-eyed statement on the CRU Hack, its been trying to "clarify" its way out of the consequences (ie. shock and revulsion among its membership). What has become increasingly clear is that Denialists were able to hijack its Energy Group, and then its Energy sub-Group, and slip their statement out the door without proper oversight from the governing body. Some general background on that here and here. And it looks like Terri Jackson, one of the folks in question, is using her IOP connections to stake a place on the global warming denial rubber chicken circuit. 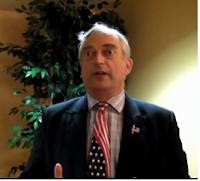 DC's piece is most interesting, as it presents strong evidence that knowledge of the IOP's statement was conveyed in advance (almost a month in advance, in fact) to climate change denier and swivel-eyed lunatic Christopher Monckton:

Monckton was touring Australia – perhaps still is – and during that tour he made some allusions to Climate Scientists being about to face criminal charges, and also to peak academic bodies having some very interesting submissions to make to the UK inquiry.
[...]

From what I’ve seen, Monckton, Plimer, Carter, etc are in frequent enough contact with each other and the organisations that circulate fud as their strategy, that I’m fairly confident Monckton knew ahead of time and was basically boasting

Monckton’s tour began in early February, well before the parliamentary submission deadline of February 12. And the IOP submission wasn’t released to the general public until the end of that month, along with the other received submissions.

So, a thoroughly planned out and well-executed exercise in fud creation. Very much like the infiltration of the APS, which Monckton also had a hand in.

Posted by bigcitylib at 7:05 AM

So they have their own terrorist network... oops, that should be denialist network of course.