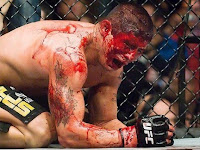 "If I were premier, this [UFC mixed martial arts in Ontario] would have happened by now," [Tim Hudak] said Monday of sanctioning the sport. "Quite frankly it's an enormous tourism opportunity."

You know, I remember a buddy of mine bought a van and had a couple of sword swinging chicks in metal bikinis painted on the side of it against a desert background. The point of owning the van and all the "artwork" was to pick up (real) women, but he was never satisfied...in fact more or less appalled...by the quality of woman that was willing to jump into the back of a van on spec.

If Ontario courts UFC tourists, I think we will wind up feeling the same way...ie. a bit unclean when we have to handle them.

PS. I've watched UFC and, yes, occasionally felt that wild monkey rush, though most times it's been like seeing two guys clutching and grabbing and generally acting like they needed to rent a room. Anyway, part of the UFC's charm has always been that you were watching it off a wonky satellite signal beamed from a dark shit-hole located somewhere in the old confederacy. Why mess with the mystyque?

Hudak's just worried that Ontarian boys are going to turn into pansies if they don't get to watch beefy, sweaty, half-naked men (settle down Paul S.) rolling around on the floor more often.

I had to look this up. I had no idea what MMA was.

Love your stuff BCL but on UFC/MMA you're way off.

MMA is among the purest forms of athleticism and the most demanding physically.

It's no less violent than hockey, football or rugby and is certainly safer than that other sport where they put pillows on their hands and bash each other in the head hundreds of times per fight.

If it's not your thing fair enough, but it probably just means your a pansie :)

p.s. check out GSP's fight this Saturday night to see one of Canada's most gifted atheletes. And he wears really tight spandex shorts if you're into that sort of thing...