While it appears as though the PC may be ready to throw in the towel on this one, Jack's Dipper's are looking a bit snaky:

In fact, the NDP, which voted for the Liberal motion, may be the party that gets the Conservatives off the hook on the bulk-mailing issue.

NDP Leader Jack Layton launched a blistering tirade against "King Stephen Harper" only to waffle when it came down to whether his party would actually support the ten-percenter ban behind the closed doors of the Board of Internal Economy meetings.
Is a behind-the-scenes deal in the works? A coalition, as it were?
Anyway, here's the Membership List for the BIC. 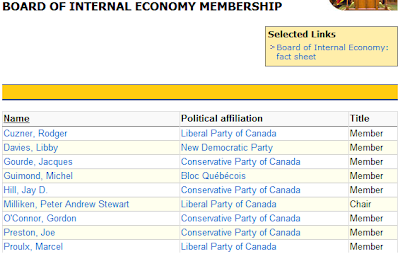 Libby Davies seems to be the one to watch. Does the Chair get to vote, I wonder?

PS. I note that the PMO has issued Tory MP Bruce Stanton an official "mind change" since he voted no in the HOC. Some interesting maneuvers going on.

Posted by bigcitylib at 7:00 AM

Yes, Milliken, the Chair, gets to vote.

"Libby Davies seems to be the one to watch."

Careful as she goes there, buddy. You only have one set of eyes and too much of Davies could lead to blindness.

You only have one set of eyes and too much of Davies could lead to blindness.

And what do you look like Fred? Myron Thompson, quite likely.

Anyway, from what I saw of Layton's interview on the CBC, it looks like the NDP will complicate the issue by trying to make distinctions with respect to content: some flyers would be acceptable it they represented vital information, as opposed to the cheap smears most of them communicate now.

To which I say: "Fuck that and ban them all." For Conservatives, cheap smears are the only kind of vital information they know.

To which I say: "Fuck that and ban them all."

Couldn't agree more. My old conservative self is coming out here, in that I can't understand how we let something like a $10 million/year loophole like this continue. MPs outside my riding sending me their party's political propaganda ...and I'm paying for it?!?! Fuck that, and anyone who supports this bullshit! (Hello faux-conservative party of Canada?)

At least Marty Feldman was funny.

lets not forget the ones that look all pale, clammy and like they came out of a dimestore peepshow like Russ Heibert.