How Helena Got Her MBA

So yesterday morning BCer reveals that Helena Guergis has recently completed her MBA from the University of Alberta. Harris MacLeod over at the Hill-Times reads Jeff, reads Helena's wiki page, and thinks "WTF! How'd she get an MBA with only a real estate certificate from Georgia College. Does she really have an MBA? Does she have something better in the way of an undergrad degree?" Suddenly, Ottawa is abuzz!

About a 1/2 hour later the buzz starts to fade as Elizabeth Thompson phones up UofA and discovers that, yeah, the MBA has indeed been awarded. That leaves Helena's undergraduate degree in question. But then Ted Betts points out over in Jeff's comments that the University will make room for students without an undergraduate degree under certain circumstances, namely where the candidates

...have considerable professional experience.... Individuals who feel that this situation applies to them are encouraged to contact the admissions office to discuss their status."

Presumably the university would have considered her time as the proprietor of a bed and bath shop. Any idiot can be a cabinet minister in the Harper government, so that doesn't count. 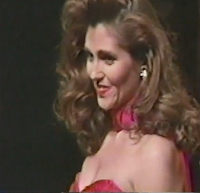 And there you have it: LEAVE...HELENA...ALONE!!! at least on
this issue.

Meanwhile here's the only picture of her that I could find on-line that shows even a bit of cleavage.

Email ThisBlogThis!Share to TwitterShare to FacebookShare to Pinterest
Labels: Helena Guergis, Her Cleavage, Her Education

Ah, nice to know they're just giving away degrees at the UofA to unqualified candidates. I'll remember that anytime I come across one of their alumni.

The information, below, applies
to the Executive MBA Program.
Helena Gueris has an MBA which
is different and so are it's
rules for admission.

But then Ted Betts points out over in Jeff's comments that the University will make room for students without an undergraduate degree under certain circumstances, namely where the candidates

...have considerable professional experience.... Individuals who feel that this situation applies to them are encouraged to contact the admissions office to discuss their status."

Quite right, carswell, which now leaves how she got in a mystery again! In fact, the regular degree seems to give no out for someone with merely stellar work experience. The mystery remains!

Ah, nice to know they're just giving away degrees at the UofA to unqualified candidates.

Don't worry. If you read some of the research that's come out recently on the true nature of these "Masters of Whatever Administration" degrees, particularly with respect to the dubiousness of the various premises, assumptions and theoretical principles that support the management orthodoxies the degree holders are trained in (or more precisely, indoctrinated into), you might start concluding that "qualifications" aren't necessarily anyone's real concern.

Certainly many of these "sped-up buy-a-degrees" are available online now-a-days. Institutions are also in the line of making money, and the "adult learning/university extension program" degrees are a big winner. These degrees often exist merely to make people who never went to school after high school feel good about themselves... On the other hand, some are serious degrees... (few of them).

Money was no object, if she
actually paid. Ask yourself,
why Alberta? Home of the Cons
and alma mater of her husband
would be a couple of answers.

Strings were pulled. Lots of
strings. Getting admitted was
definitely going to be a factor
in other provinces even tho'
some tuition was quite a bit cheaper.

It would be interesting to know what she graduated with...a C-??? What was her project for granduation? This act makes people swear and Canadians get upset when someone might say this is an elitist country? What a joke. Nothing but a big bad joke. I wonder who paid out the money for her degree. It does nothing but piss me off when I had to dam will work for my degrees.

Well, as a UofA graduate myself, I was going to express umbrage at some of these comments. But I graduates from Arts, and took courses in the Sciences, where Helena would not have been very popular with the student body.

But I remember now that the UofA business school received nearly all of its money - to my knowledge - from Francis Winspear, who also provided a good chunk of the funding for the Reform Party. That may be the connection. It is possible that as a condition of hte funding the business school is required to hire the occasional Conservative cabinet minister.

Not hire, but admit. I think I should watch the alcohol.