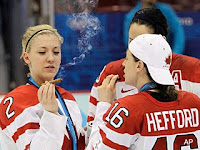 ...we suggest that in the next printing the picture of “gay” activist Mark Tewkesbury which is still in the guide, be replaced by one of our gold medallists of the Vancouver 2010 Olympics.

Presumably one of the non-gay ones, which may rule out the women's hockey team. My wife--who teaches skating--tells me Scott Moir is probably okay ( he wants to join a police S.W.A.T team, which is a usually good sign, although on the downside he obviously likes dancing), but the rest of our figure skating team is a writeoff.

No word in Catholic Insight about the recent "procurement of gay partners for trysting with the Pope's gentleman-in-waiting" scandal, I see.