A Little Off, Perhaps 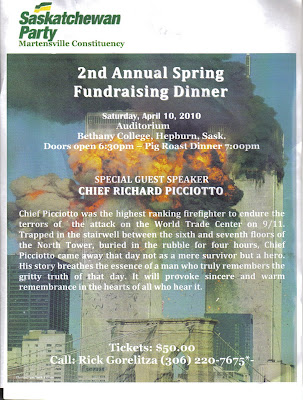 Aside from these, I'm at a loss for words.

this is sick look at your pic and then your text. This might be a mistake but you better remove it or I think you will get some publicity you do not want.

I'm not at a loss for words. I want a divorce from western Canada. I contend irreconcilable differences.

Cram your threats up your arse, bubba.

What's bizarre is that the poster is REAL. Brad Wall's lying letter here is REAL. The billboard I make fun of here is REAL (my version is the spoof).

Omar, "western Canada" is not married to you. Its your right hand.

bubba's just upset because he designed the poster.

I'll endure an amputation then.

this is sick look at your pic and then your text. This might be a mistake but you better remove it or I think you will get some publicity you do not want.

Bubs, what the hell man?

I don't want a divorce from Western Canada. I want it to go to rehab. I'll stand by it every step of the way if it makes that commitment.

Many police died in that attack. MANY BURNED. Dont you see whats wrong with what you write below the picture?You argument may be good and right but please take the text you have below the picture away. It is hurtful on quite a few levels.

If you have some problems with this poster ... why aren't you raising your concern with the Saskatchewan Party who did the poster ... complete with burning buildings AND and advert for a pig roast supper!

this is a dumb poster and a big mistake I will contact the Sask party also, This is such a stupid thying how could someone not see the stupidity wow.

I couldnt believe it. You are right my first comments were before i even read the poster I could see all that was wrong with it. Someone should lose their job over that poster.Where did u see the poster?

GO through the h/t link and you'll see a couple of Sask. Blogs also have pics of the poster and info about where it came from.

Bubba are you for real, or just fucking around?

I want it to go to rehab.

It does not get to go to Celebrity Rehab though. A mere 15 minutes of fame doesn't qualify.

I phoned the number on the poster and asked if they had taken them down yet. Left a message saying they should take a look and realize they are innapropriate. still kind of surprised how that could get through an edit.sorry for commenting before doing my homework BCL.

Yeah, sorry about that "up your arse thing" too, bubba. I'm a little edgy these days. It's all western Canada's fault of course, but you understand..

Wow! Is the guy who designed this poster the same braindead schmuck that made those "Pork The One You Love" billboards for SaskPork years ago? Talk about not thinking things through.

LOL ... I forgot about those! Yes ... it could be the same Saskatchewan Party suspects!

It does not get to go to Celebrity Rehab though. A mere 15 minutes of fame doesn't qualify.

I caught that show for the first time just a few weeks ago. Apparently, it does. I barely recognised anyone.

Since most teevee these days is really bad, I thought I'd try capitulating and get hooked on it. But it's really boring. I think you have to be drunk or high to find it entertaining.

I imagine it's popular in Western Canada.

Is the guy who designed this poster the same braindead schmuck that made those "Pork The One You Love" billboards for SaskPork years ago?

This is just dumb. And frankly, I'm fucking tired of the Canadian right flogging 9/11 as is it's *our* tragedy.

It isn't. The Americans brought it on themselves. That doesn't justify the death of innocent people but it does explain it.

Hey don't get me wrong Ti, I really like risqué advertising too, but the problem was the guy that did those didn't realise the double entendre ...which made the story that much funnier.

As for 9-11, I am as sick of our rightwingnuts making it 'our' tragedy as much as you are, but I won't say the US brought it on themselves - though I understand your point. I will however say that any future major terrorist attack on US soil would most certainly be brought on by their actions since 9-11.

...but the problem was the guy that did those didn't realise the double entendre...

Are you sure about that? The extra genius in that kind of advertising (which is common in other countries, especially in Britain and Australia) is the provision of a perfectly innocent explanation to go along with the more risqué one. Check out this Aussie beer ad.

but I won't say the US brought it on themselves..

I don't agree and I don't see the value of maintaining otherwise. In fact, many Americans predicted it. As I said, I'm not justifying the murder of innocents and I'm all for capturing those who are responsible and putting them in jail for the rest of their lives, but that doesn't change the history that led to that moment.

Well I could be wrong on that SaskPork advertising thingie (not bothering to look that up on the ‘net) but I though the newscasts back in the day said the creator(s) didn’t know the word ‘pork’ could also be a verb. Or maybe they did and it was just some prudes on the pork marketing board who were embarrassed? I don’t recall, it has been a while. I though my compassion added some comic relief to this thread anyhow. I really do have to question the mental state of anyone using the actual 9-11 explosion photos for advertising anything – for any reason – let alone a pig roast for a political party.

As for the actual 9-11 attacks, I don’t disagree with you that the US was heading for some serious blowback from their decades long Realpolitik exploits in the middle-east committed prior to those attacks, however the scope and targets went beyond what I would consider as expected. Back then I was thinking more ‘Iran’ situations popping up would be likely, where seriously US-friendly regimes fall to popular Islamic revolutions, say in Egypt or Saudi Arabia. I think the US was pretty much asking for something like that to occur (and it still may), but not 9-11. However with their recent misadventures in Mesopotamia and Indo-Scythia, they are pretty much inviting future direct terrorist attacks on their home soil.

I think the US was pretty much asking for something like that to occur (and it still may), but not 9-11.

Why? In terms of lost of life, it's a rather minor event, when compared to the millions of dead American imperialism has left in its wake.