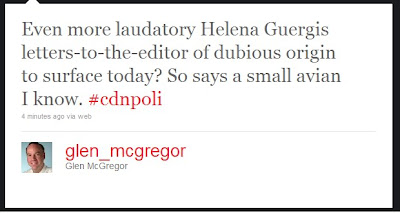 Glen McGregor is: National affairs reporter with the Ottawa Citizen.

The only way I can believe Guergis didn't know about any of this would be if her staff were not carrying out their media review duties properly and not bringing these letters to her attention. If it's all the same people, I imagine they wouldn't.

Silly Ti-Guy. It's not lying if a Conservative does it!

I guess it didn't take the newspapers that long to figure out.

I can't imagine they get a lot of laudatory letters praising Guergis.

When they started showing up, while they put two and two together.

Of course Guergis is lying.

What else can you expect from such a spoiled bitch.

What I'm waiting for is Jaffer to pretend to be one of his aides and to write a letter. Then the world will have come full circle.

Check out Susan Delacourt's blog on this issue today - interesting.

Being willing to marry Rahim Jaffer - now that's conclusive proof of having no judgment or political savvy.

This is my take on that weirdo couple Guergis/Jaffer.

Isn't it appropriate that they hooked up.

At least they are not inflicting themselves, on anybody else.

Hey, does anyone remember this?

Seems like Jaffer and Guergis really are made for each other.

"The people of Canada have spoken, twice. Canadians do not want another election. Stephen Harper is doing a fine job in spite of the mean-spiritedness of the opposition. Why can't our parties work together instead of against each other."

Did Patrick Brown get his mom to write it?