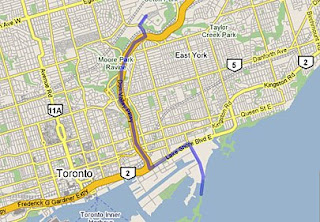 Last night police arrested Adel Arnaout, 37, a landed immigrant from Lebanon, in connection with a series of letter bombs sent to people around Toronto and Guelph. They caught him at a gas station, and found several explosive devices in his car. Terrorism is not suspected, but as of right now (about noon), the car is being hauled down the DVP to the Leslie St spit in a specially armored trailer. Once there, the bombs will be detonated.

Not surprisingly, the DVP has been closed for the duration of the trip.

Update, 2:57: Three bombs detonated, the DVP back in operation. Not much in the way of detail on the suspect yet. The only hint of a clue as to motive is that one of the guys he went after was a home renovator, another a real estate lawyer.

maybe he got his ideas from home .

A new video game calling for killing the leaders of Lebanon's March 14 Forces has been launched in Lebanon.

The game also accuses the leaders of collaborating with Israel and of surrendering to U.S. Secretary of State Condoleezza Rice.

The object of the game is to kill security personnel protecting the Lebanese government palace, to break into the palace, and to assassinate all the ministers present.

Lebanese Youth and Sports Minister Ahmad Fatfat called the game "political terrorism that plays a part in the current offensive against the government."

How can this not be terrorism???

How can this not be chocolate cake, Frank?

What the hell does "landed immigrant" have to do with letter bombs? Are you trying to drum up hatred against landed immigrants? How is being from Lebanon significant in this report? Are you trying to say all Lebanese are bomb-making terrorists? Shame on your irresponsible blogging! Why would you suggest that letter-bombs are even remotely related to terrorism? Anybody could have sent a letter bomb, not just a terrorist.

So, not all bad then!

David Duff, I don't think you understand the gravity of this situation.

It was almost terrorism. Therefore, we should be...almost terrified.

But one was a renovator. Worked with his hands and all that. If it had just been lawyers, I doubt they would have even arrested the guy.

Almost terrorism? So you're fine with letter bombs being sent out? What kind of idiot are you?

Phew! Good thing nobody named Mohammed was involved, otherwise it might signify an intolerance for religious diversity by the neo-cons.