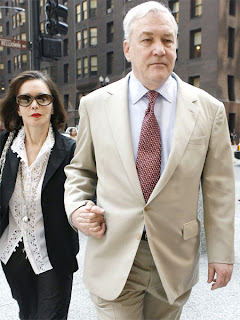 Conrad Black must await sentencing in the U.S., because he can't muster the funds to get into Canada, ruled Judge Amy St. Eve today. She also ruled he should be given a daily spanking with a wet towel, to soften him up for those lonely men he'll meet in the joint.

Say, whose that hot chick beside him? Is that Barbara Amiel? I bet if she ever runs out of the blood of virgins, she'll crumble into dust like that chick in The Hunger .

Posted by bigcitylib at 6:21 PM

Not sure if those men are necessarily 'lonely' or not but they do need an... ummmm... outlet.

Lord Tubby may wish to keep the million-dollar, seven syllable words to a minimum in the big house.

Tubby may be the best The Robber Bride can do, but there's far better looking men around in any prison.

His funds are being investigated and some feel he has $60 million stashed somewhere and I'm sure the judge knows this.

Hey, at least he doesn't have to be in jail while waiting for the sentencing and his appeal - what more does this guy want.