The Return Of The Turtle! 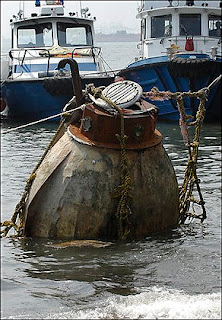 My Gawd! I thought when I saw the picture at left, someone has built a working replica of a revolutionary war era Turtle submarine, the first submarine ever to be used in combat!

And that someone is Duke Riley, a New York artist, who was trying to get his little egg-shaped craft close enough to the Queen Mary II so he could snap a few photos of his home-made sub against the cruise ship's looming bulk. Instead, harbor police had him arrested when he violated its security zone.
Here is Mr Riley's flickr site devoted to his "egg", and here his website, devoted to some of his other projects over the years.
Incidentally, I really did tag this thing as a replica of The Turtle when I saw it. As a teenager, the history of the submarine was one of my favorite topics. As it turns out, most of the the pioneers of this technology found themselves dead at the bottom of a river somewhere. So it had both excitement and pathos!

Posted by bigcitylib at 6:46 AM

Email ThisBlogThis!Share to TwitterShare to FacebookShare to Pinterest
Labels: History of the Submarine, The Turtle