But Wouldn't Hondo WANT Them To Pee On It? 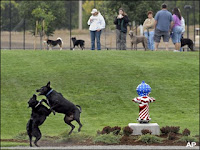 HILLSBORO, Ore. - The flag-painted fire hydrant that was removed because critics thought dogs would disrespectfully urinate on it is being reinstalled, but with a fence to keep the pooches away.

The hydrant was part of a dog park named for Hondo, a police dog killed chasing a suspect 10 years ago.

"While hydrants are playfully associated with dogs as a 'target,' this hydrant was specifically designed and painted to serve as a very personal tribute to a service animal killed in the line of duty," said Hillsboro parks spokeswoman Corinne Bloomfield.

Firstly, dogs are never disrespectful. They pee on stuff out of love, or because that's what dogs do. If you were ever to catch a dirty hippy peeing on an American flag fire hydrant, that would definitely be disrespectful. But with dogs, there is no such connotation.

Furthermore, I could not disagree more with Hillsboro resident Louanne Douris, who wrote:

"That gallant dog must be turning in his grave at the thought of the flag being desecrated every time a dog pees on that hydrant!"

Nonsense! I'm sure Hondo would have encouraged fellow canines to pee on her monument, thinking that in reality it was a monument to all of dog-hood, that it was her gift to the whole tribe, as it were.

Finally, there seems some confusion about who has been lobbying for the re-installation of the hydrant. The Sun piece claims that "dog owners and war veterans [spoke out] in support of the tribute". War veterans? Jesus, somebody's got time on their hands.

Conversely, this article suggests that it was an "uproar from the dog community" that led to the re installation of the hydrant. I am inclined to believe it. They seem to have a better read on the situation than their human masters.