Timothy Ball Denies It All

Canadian Uber Denier Timothy "Cue" Ball isn't just down on AGW. On a number of occasions, he has trashed the Montreal Protocol and the idea that CFCs in the atmosphere have caused the famed "Ozone Hole". His latest denunciation comes in the form of a brief rant again Paul Crutzen, whose work on Ozone depletion won him a Nobel Prize back in 1995. From the Climate Skeptic's Cafe:

[Crutzen's] Nobel for ozone likely should be withdrawn because there was never any proof that CFCs were affecting the ozone. Variations were due primarily to variations in ultraviolet radiation combined with natural atmospheric circulation. I don't think Crutzen ever said that. CFCs were the equivalent of human produced CO2 because you always have to blame humans for every change and evil. Besides, Crutzen was also the one who suggested, in another ill-informed attempt at geo-engineering, that we must add sulfates to the atmosphere to offset global warming.
Of course, the causes and effects of CFCs in the atmosphere has been well established, and not by any stupid scientists either. Here is Oderus Urungus, describing how he and the other interstellar chaos warriors known collectively as GWAR were released from their icy Antarctic Prison:
Because of the brief dominance of hair-metal ban 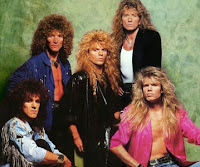 ds in the late 80’s, and their overuse of hair spray, a huge hole was burned into the ozone above the GWAR temple, and the member’s of GWAR began to de-thaw.
Read it and weep, Cueball, bands like Whitesnake not only played shitty music, they nearly destroyed the planet. It took the work of Crutzen to save us...him and Page Hamilton.

Beautiful! Definitely chuckle of the day.

I am so sick of these arrogant assholes who set out to re-shape the planet to their liking and have the audacity to think we can control nature, yet state in the same breath we have no impact on it.

Breaking News: Tim Ball begins to doubt evidence of his own existence; disappears in a puff of smoke.

First you've never paid 5 minutes of attention to Tim Ball if you think he denies global warming he says it happens as does global cooling.

In fact when he graduated from university the consensus was we were heading into an ice age.

Now how is it possible that the ozone got bigger after we got rid of CFC's?

Oh well it cost billions and the Montreal Protocols were wrong, no big deal eh. Unless you care that the Billions wasted on cfc's might have saved lives elsewhere. Millions of people in the third world each year die from easily preventable diseases but Chretien fought the ozone and lost.

Funny the MSM's are so silent on a record breaking ozone hole last year. However before the Montreal protocols they would have been all over it saying we need to ban CFC's. Oh wait they just want to go from one fear mongering episode to another. The ice age, pollution, y2k, ozone, global warming...

Maybe someone needs to buy the msm's some big city internet access,....

Meanwhile China builds one coal powerplant a week and Maurice strong wants to move our economy there. Some are happy to oblige did Martin ever get the Chinese to finish his ships?

How did Suv's cause Mars to warm up?

When I am driving through Bangkok (thats were I live), I can see large scale HCFC-R22 compressors for sale. HCFC-R22 is sold everywhere in the 3'rd world and also in the not so much 3'rd world.

See also how much the temperature has raised in Kathmandu

Genslub...when did you get out of rehab?

There never was any consensus on ice age.
S. Ichtiaque Rasool and Steven Schneider made a "what if scenario". If (cooling) aerosols increased a factor four, the temperature would fall enough to be disatrous.

When Fred Hoyle got the book "Energy or Extinction" published in 1977, the nuclear power lobby changed their aerosol argument to a CO2 argument almost from one day to the next.

About fear mongering, the nuclear power lobby also had another argument. They claimed that the resistance against nuclear power simply was subversive activity from Soviet. If you were against Nuclear power, you were just a useful idiot.
My friend lost his job short time after the incident on 3-Mile Island.

When China is building new coal fired power plants, they are also closing down some old inefficient, polluting plants.

China actually claims that they are improving with respect to the Asian brown cloud.

China has planned to invest 2 trillion yuan in renewable energy by 2020.

Why would Ball be wrong. Even Hansen says that there is no warming due to CO2. Hansen said in his 2000 paper “Global warming in the twenty-first century: An alternative scenario” then how does anyone prove there is CO2 based warming by observing the climate?

To quote from Hansen in the report:
“Our estimates of global climate forcings indicate that it is the non-CO2 GHGs that have caused most observed global warming.”

Further, Hansen went on to say:

“Fossil fuel use is the main source of both CO2 and aerosols, with land conversion and biomass burning also contributing to both forcings. Although fossil fuels contribute to growth of some of the other GHGs, it follows that the net global climate forcing due to processes that produced CO2 in the past century probably is much less than 1.4 W/m2. ”

Which reads as burning fossil fuels produces CO2 and aerosols which cancel either other out. That leaves only the other GHGs as the source of 20th century warming.

The IPCC assumes a 4 W/m2 forcing but as the Hansen found “Most climate simulations, as summarized by the IPCC, do not include all of the negative forcings; indeed, if they did, and other forcings were unchanged, little global warming would be obtained." In this study Hansen predicted that "Global warming at a rate 0.15 +/- 0.05 degrees C per decade will occur over the next several decades." This works out to being 1.5 degrees +/- .5 C.

The IPCC agrees that there are problems with the instrumented and proxy readings for the 20th century and it can be seen at http://ipcc-wg1.ucar.edu/wg1/Report/AR4WG1PubCh06.pdf

"In their large-scale reconstructions based on tree ring density data, Briffa et al. (2001) specifically excluded the post-1960 data in their calibration against instrumental records, to avoid biasing the estimation of the earlier reconstructions (hence they are not shown in Figure 6.10), implicitly assuming that the 'divergence' was a uniquely recent phenomenon, as has also been argued by Cook et al. (2004a). Others, however, argue for a breakdown in the assumed linear tree growth response to continued warming, invoking a possible threshold exceedance beyond which moisture stress now limits further growth (D'Arrigo et al., 2004). If true, this would imply a similar limit on the potential to reconstruct possible warm periods in earlier times at such sites. At this time there is no consensus on these issues (for further references see NRC, 2006) and the possibility of investigating them further is restricted by the lack of recent tree ring data at most of the sites from which tree ring data discussed in this chapter were acquired."

GISSTEMP has the following global temps for 2001-2006 (J-D): 57, 69, 67, 60, 76, and 65. Anyone want to point out where the warming is hidden in there? Which could also be why the big news was warming was going to start again after 2009. Do not get me wrong, I believe that we have had warming since the LIA. But I do not see accelerated warming that the instrumented direct readings are indicating. The proxies are not showing this accelerated warming.

Warming in the Antarctic is mainly limited to the Antarctic Peninsula and even then manly in the portion that is outside the Antarctic Circle as can be clearly seen at http://svs.gsfc.nasa.gov/vis/a000000/a003100/a003188/index.html’. The interior of Antarctic is clearly cooling. This is not consistent with any of the GCMs. If the CO2 theory is correct with the sensitivity that is expected by the proponents, then warming should be happening at both poles.

Frontier Centre: We are all familiar with the modern theory that the world’s climate is getting warmer. Is it?

Tim Ball: Yes, it warmed from 1680 up to 1940, but since 1940 it’s been cooling down. The evidence for warming is because of distorted records. The satellite data, for example, shows cooling.

FC: Could you summarize the evidence that suggests the world is cooling slightly, not warming up?

TB: Yes, since 1940 and from 1940 until 1980, even the surface record shows cooling. The argument is that there has been warming since then but, in fact, almost all of that is due to what is called the “urban heat island” effect – that is, that the weather stations are around the edge of cities and the cities expanded out and distorted the record. When you look at rural stations – if you look at the Antarctic, for example – the South Pole shows cooling since 1957 and the satellite data which has been up since 1978 shows a slight cooling trend as well.

gens lub:
"In fact when he graduated from university the consensus was we were heading into an ice age."

Wrong. This "consensus" has been cooked up after the fact. A couple of magazine articles, people thinking out loud, a TV Talk show... not exactly a consensus.