You Think Climate Scientists Are In It For The Money? 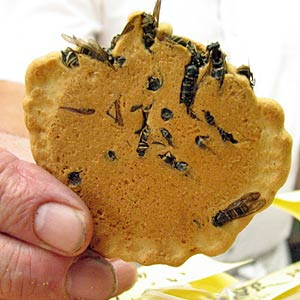 This guy clearly isn't; he's been reduced to eating bugs.

Posted by bigcitylib at 9:01 AM


A press release below from Australian group, "The Carbon Sense Coalition" (info@carbon-sense.com) -- in the wake of the strong climate focus during the recent APEC meeting of heads of government in Sydney

The Carbon Sense Coalition today called for a Royal Commission of Enquiry [an independent but government-funded judicial enquiry with wide powers] into the scientific evidence for man-made climate cvhange. The Chairman of "Carbon Sense", Mr Viv Forbes, said that the Sydney APEC Declaration was a clear signal that most APEC nations are not going to swallow the pseudo-science and economic poison being peddled by Dark Greens from yesterday's states like Europe and New Zealand.

The APEC nations told Australia, as politely as possible "You may commit economic suicide if you wish, but we are not going to put our feet on the sticky paper." This "Never-Never" declaration is a warning call that Australia should re-examine the basis for its enormous waste of money on "Global Warming".

China and India recognise clearly that "Global Warming" is just another European plan to hobble economic competition from Asia. The Global Warming Scam would deny cheap clean power to millions of energetic Asians.

France closed its last coal mine in 2004 and is now heavily dependent on nuclear power. German coal mines are no longer economic, and even in Britain, fewer than 5,000 coal miners work the mines that once fuelled an empire. Thanks to their Dark Greens, Europe is now dependent on imported coal for steel production and gets its power from imported uranium and gas piped in from Russia and beyond.

France has always envied and feared the cheap and abundant coal of the Anglo American world. The world dominance of Britain and then America in steel, manufacturing, metals, steam, railways, electricity and naval power was fuelled by coal, supported later by oil. China and India are about to tread the same road. The Dark Greens of Europe, secretly supported by their decaying industrialists, fear the growing power, energy and competitiveness of these emerging giants.

This is not about climate - it is about using public hysteria to benefit certain countries, business interests and ideologies. There was no declaration of carbon emission targets from last week's Russian delegation to Queensland. Russian scientists are not sucked in by distortions, exaggerations, half truths and poor science being peddled by the likes of Al Gore and Bob Brown.

The Russians, the Arabs, the Indians and the Chinese cannot believe the apparent stupidity of the English speaking world. They have no intention of adding to their energy costs or forcing their businesses to waste money on dreamtime research such as carbon sequestration - they are cynically planning exploit the declining competitiveness of western industries and to milk stupid westerners of any "carbon offset credits" they can find or invent.

There is already a groundswell of opposition from well informed scientists, engineers and individuals all over the world to the lack of evidence supporting the Greenhouse Religion. A recent scientific conference in Melbourne organised by the Lavoisier Society drew scientists and delegates from all over Australia and South Africa. Even the PM's own backbench contains well informed climate sceptics, and the ranks of scientific sceptics are growing all over the world.

A Royal Commission taking evidence from more than a few government or United Nations hacks would soon establish the facts that:

* 1934 was the hottest year of the twentieth century.

* Current temperatures are not extreme or unusual.

* Past records and scientific evidence show that changing surface temperature is more likely to be a cause (not a result) of increased CO2 in the atmosphere.

* CO2 and water vapour have always been essential components of the atmosphere. Neither is toxic, both tend to retain some of the sun's warmth, and both are absolutely essential and beneficial to all life on earth.

* The most likely causes of variations in surface temperature are connected with solar cycles, variations in the heat output of the sun and eras of volcanic activity.

* More CO2, water vapour and warmth in the atmosphere would be a boon to most of humanity.

* There is empirical evidence to suggest that earth's temperature is more likely to fall than rise - ice ages are more normal than today's balmy climates.

* There is significant scientific opposition to the proposition that man's emissions of CO2 are causing global warming or any other harm.

Earth's climate is always changing and we must do what every generation of our ancestors did - "adapt to whatever nature has in store for us". Our ability to adapt is severely reduced by crippling our economy and misdirecting billions of dollars of research funds into nonsense like carbon sequestration or rich man's toys like windmills and solar panels.

While billions of dollars are being spent on na‹ve attempts to build ever more complex computer models of atmospheric heat circulation, our oceans are largely unexplored. The vast deposits of methane under our oceans are both a threat and a promise for future generations, but too little research is being done in this field. And the hundreds of thousands of undersea volcanoes, which may hold the key to past and future climate change, remain largely unmapped and un-monitored.

Australia, an island almost alone in the Great Southern Ocean which circles the globe, should take the lead in ocean research instead of letting scheming politicians from abroad mis-direct our research priorities to spurious questions.

I see you have another APCO employee visiting your blog.

Must be hard for these poor people after the truth about tobacco came out. Lucky another issue came up for them to obfuscate.

What do they pay these freaks these days?

Please make your essays go away.

If I wanted to read anything lengthy on the topic, I would (and do) go to peer-reviewed journals. I certainly wouldn't get my information from a drive-by blog posting consisting of a shotgun blast of random bullcrap culled from questionable sources. Other than cutting-and-pasting, which you are quite accomplished at, what other qualifications do you have that would cause me to give you any credibility?

meanwhile, over at NASA, the good Dr. Hansen is restating the restated results of his multiple "adjustments" to the data he adjusted both prior to and after he was forced to publish his restated findings.

Good solid science that. If it was a public company instead of NASA, the FCC would be the lawnmower and Hansen's ass would be well mulched grass.

Summary of "anonymous 4:35": James Hansen had an error in his data, so the entire climate change research program should be dismantled.

I suspect you have to get up very early to come up with whoppers like that.

Oh my god...we're eating bugs. I'm having a flashback to Sunday School stories of locusts and honey.

And don't ever 'make your entries go away' as another commenter suggested. If they can't take it, then to heck widdem.

Shorter please make winter go away: It's a conspiracy! Look I just debunked the science!

Come back when your paper is published.

This is what you neo-coms want for everybody else (except yourselves, of course). YOU PEOPLE need to freeze in the dark and eat bugs to save the environment. I'LL fly around in my private jet earnings millions and telling you what to sacrifice next.

I'LL fly around in my private jet earnings millions and telling you what to sacrifice next.

"Earnings millions"....sweetie, put the hair-net back on get to work on my order. And no, I don't want fries with that.

Check out the vast conspiracy behind this!

You eat all the bugs you want. You save the planet from the boogeyman.

In the meantime, I'll be bbqing up a delicious pork loin roast, or maybe breast of Canada goose.