Good News! You Can Still Bop That Cheerleader! 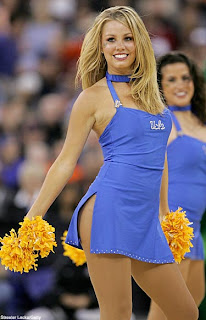 A solution in search of a problem, Bill C-22 was a small chunk of red meat thrown to the Tories SoCon base, who apparently don't see any contradiction between lamenting low birth rates among whites and trying to stop teenagers from screwing.
She's Still Legal!

Posted by bigcitylib at 9:33 AM

College student in the States...probably legal regardless

The Liberal Senate held that particular piece of legislation up for about a year. Quit being so disingenuous and put the blame where it belongs.

This touching Kodak moment in a fraternal pissing match is interrupted for an unscheduled observation on that particular piece of heterosexist legislation.

It was indeed a sop to the the religious neocons, and the Senate exercised wisdom is halting its retrograde advancement into law.

You guys may now return to your agonic macho posturing, as it were.

Mr disingenous "anonymous" ... don't you have a hand job waiting for you somewhere, calling out your name?

"The Liberal Senate held that particular piece of legislation up for about a year. Quit being so disingenuous and put the blame where it belongs."

That is a complete and utter lie. Try adding some facts to your argument, if you can.

The Bill finally passed in June, after months and months of demands BY THE LIBERALS to pass it earlier. You see, the conservatives are the ones who stalled the bill, because they were afraid that if it passed it might be a little more difficult to portray the liberals as "soft" on crime.

As for the merits of the bill itself, it does not criminalize sex between two youths who are no more than 3 years apart in age. It was not drafted to address teen age sex, but rather to address the issue of adult predators having sex with 14 year olds. In my line of work I see that all the time, and fully support the measure to increase the age of consent.

These cases that you see could not be dealt with under the current laws?

Like a true conserative, why don't you go have toilet sex at an airport.

BCL - No, and frankly from what I have seen I would prefer the age of consent be 18, with a 5 year age difference window.

Teenage girls are stupid. Older men can take advantage of that. It is consensual sex, and does not fall within any of the definitions of sexual assault, but it is predatory behaviour, and it happens all the time. It also happens to teenaged boys. The predator is almost always a man, though I have seen screwed up teenaged boys who have been preyed upon by older women as well.

Silly little anon - simply repeating a lie does not make it true, though I can well understand why you think it might, since your little hero Harper subscribes to the Nazi's Big Lie theory.

Gayle, since we are swapping anecdotes. When I was in college I briefly dated a 16 year old, who turned 17 during the time we were dating. Previous to me (when she was about 15) she had dated a 34 year old man in a non-platonic relationship. Her parents knew about it, and in fact encouraged it as the fellow was quite well off financially (a lawyer). In the end she found another fellow in about his mid twenties and married him (she was about 18/19). But essentially she and the older lawyer went their seperate ways with no harm done.

I do not see what possible use criminalizing that relationship would have done.

Similarly, there's that U.S. case where the teacher and 13? 14? year old male student was dating his teacher. She was eventually put in jail, and when released, the two married. So what did that accomplish?

Shaddup and stop thinking about pedophilia, you pervert.

You continue to support the most idiotic causes, on the grounds of doing the opposite to common sense.

When will you start protesting gravity, as a construct of white middle-class men to hold power over everyone else? Jeeeeeeeez.

BCL - I have no doubt there are those kinds of stories out there. I admit I am totally biased about this, because I generally come into contact with the damage these relationships do on at least a weekly basis.

That said, I see your point. I do disagree with you on the activity this legislation is attempting to capture, because if it were only about teenage sex they would not have included the 3 year age gap rule. This rule already exists with the 14 year age limit, so all the conservatives have done is raise that limit.

If you don't like that, there's something wrong with you.