There's A New Denier In Town, Or: Who The Heck is Oliver "Iron Sun" Manuel? 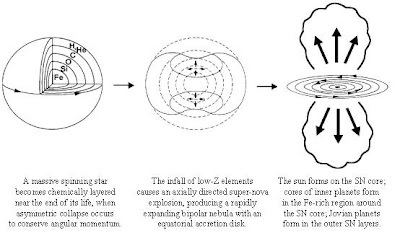 Oliver Manuel is a dissident nuclear chemist best known for his "Iron Sun" Theory. Lately, Mr Oliver has been dipping his toes into the Climate Change skeptic community, and a paper in Energy and Environment may be in the works. By way of "prefutation", here is a bit of background on the man and his work.
The inspiration for O. Manuel's novel ideas came during the 1960s, when he noticed that the abundances of certain elements in meteorites were distinctly different from those in the Earth and much of the solar system. From this humble beginning, Mr. Manuel developed his theory that our solar system was created during the explosion of a super-nova five billion years ago, and that our sun is the collapsed, mostly iron remnant of that super-nova (see figure above).
Although many scientists acknowledge the fruitfulness of Manuel's original observations, and although he is still a member in good standing (as it were) of the relevant scientific community, by his own admission "Ninety-nine percent of the field will tell you [The Iron Sun theory is] junk science."
Recently (this year, I believe), Mr. Manuel has began hanging out at Denialist websites like Climate Audit, and expressing skepticism in regards to AGW. For example:
I suspect that NASA has used some of the same tricks to peddle AGW (anthropologic global warming) that it used to promote the myth that planet Earth is heated by a steady, H-fusion reactor in the core of a Hydrogen-filled Sun.
He has also been promulgating the idea that, somehow, his ideas explain the current climate phenomenon. So what connection does The Iron Sun Theory have with a warming Earth?

Well, not very much, it would appear. While Mr. Manuel argues here and, in greater detail, here, that the Iron Sun theory explains the mechanisms behind the solar eruptions, magnetic fields, sun spots, and so forth, that can have an effect on Earth's climate, there is no attempt to explain the specific temperature trends observed over the past century or so. No attempt, for example, to explain why temperatures have continued to rise while solar activity has fallen.

If I were to guess, I would say that Mr. Manuel is looking to raise the profile of his pet theory by tying it to dissenting positions in other fields. Denialists tend to be far more supportive of one another's ideas than is the case in the scientific community as a whole. Its a bit like North Korea forming alliances with Iran; the outcasts tend to stick together.

Denialists claim this issue is partially a big conspiracy by climatologists to obtain grants, make money. Seems the other way around, to me.

I'm going to propose a theory that climate change is due to the psychic maelstroms produced by self-satisfied socialists and enviro-nazis (and maybe lesbians) and get Exxon to bankroll my research.

ti-guy, hurry! Exxon is suing Canada for what they say is a breach in NAFTA agreement - off shore from NFL because they find the environmental and regional guidelines "too restrictive."

Nothing like a little side-swiping smear to make your argument for you. Obviously you know you can't win your boogeyman debate with facts, evidence, physical science, etc. So you dredge up personal attacks against the scientists who haven't gulped down the Kyoto Kool-Aid.

Guess what? He used to POOP HIS PANTS, TOO! That proves his theories against AGW are wrong.

The next righty who attempts humour is getting a cock-punch. I'm tired of having all this drollery ruined by some cheetoh-dust-caked cretin squatting in front of a computer in Delisle.

Fight the boogeyman! AGW will eat your children! Blame Harper!

Skip to the inevitable? Hahahahaha...

Fucking retard. Do you ever have anything relevant to say? EVER? Your catty little comments about the humour of others is nothing more than the musings of a pathetic social failure who, deep down, feels really hurt that no one ever laughs at his jokes. Or even gets them.

"But...but...but, I just KNOW I'm funny. Don't they GET it? I'm funnier than ALL those stoopid rightites. I have a SOPHISTICATED sense of humour." (I'm serious. Ti-Guy posted that as a comment on The Raging Ranter once - that his sense of humour was "sophisticated".) It was a real pants-pisser.

Now go ahead and accuse me of stalking you again or something lame like that. Call the cops maybe? I'm sure they'd love to hear from you again. "Ranter's scaring me again. He's a BAD man! Wah!"

ranter, Ti-guy achieves funniness pretty often. You? not yet.

Holly Stick - is that some kind of prison bitch nickname? If you laugh at pompous narcissists as they throw their infantile tantrums, that's your problem. Or maybe your sense of humour is just really "sophisticated" like Ti-Guy's.

If I laughed at pompous narcissists as they threw their infantile tantrums, I'd be laughing at you, ranter. But you're still not even that entertaining. Yawn.

jlO4uH Your blog is great. Articles is interesting!